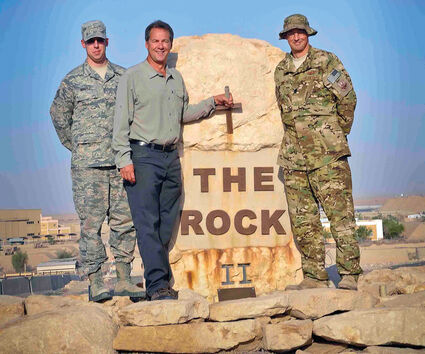 Gov. Steve Bullock made a surprise visit to Afghanistan Wednesday to meet with Montana troops in his first trip overseas since taking office in January.

The Democratic governor was in Kabul as part of a delegation that included Virginia Gov. Bob McDonnell. The two-day trip to Afghanistan includes meeting members of the Montana National Guard's 495th Combat Sustainment Support Battalion operating in the country's southwestern sector.

Tuesday, Bullock was in Kuwait to visit troops from the 1-189th General Support Aviation Battalion. He flew in a Blackhawk helicopter with of the Montana unit's pilots to tour Camp Buerhing and stayed the night at Ali Al Salem Air Base, less than 40 miles from the Iraq border.

After having seen off the unit earlier this year, some of the faces were familiar to Bullock, including a former Helena High School classmate, Melissa Loy. He ate dinner with the troops, handed out awards and gave them a message of thanks, the governor told The Associated Press.

"I've had the opportunity to welcome home troops and send them off, but to be able to personally thank them and talk about opportunities and challenges with them," Bullock said, pausing. "It certainly hasn't been an easy trip, there hasn't been much sleep, but it's meant a lot to me."

Most are in Kuwait with the 1-189th battalion. The 145 troops from that unit have been there since May for aviation support, flying UH-60 Blackhawks.

They are expected to return to Montana in February, Crowe said.

Bullock said he could not go into detail about his Afghanistan itinerary Wednesday and today because of security concerns, but he has already met military members from Scobey to Butte, and he plans to travel to visit the 495th and bring the unit a Montana state flag.

That unit has 68 troops that have been in Afghanistan since December. They are responsible for the transportation and delivery of all types of cargo in Afghanistan's southwest, having logged more than 400,000 miles and moved more than 10.5 million pounds of cargo since their deployment, Crowe said.

They are expected to return to Montana in September, and all foreign combat troops are to leave Afghanistan by the end of 2014. It is unclear how many U.S. troops will remain in the country after 2014.

Bullock declined to discuss his views on the war in Afghanistan, saying he is there to learn.

"We've been there for 12 years. It's been the longest military engagement that we've had. My views mostly have been about jobs and economic development in Montana and not weighing in on the international issues. But as Montanans continue to serve, we can see that we make a difference," Bullock said.

Before the delegation set off for Kuwait earlier this week, Bullock first stopped at Walter Reed Hospital in Washington to visit wounded soldiers.

He plans to return to Montana Friday.