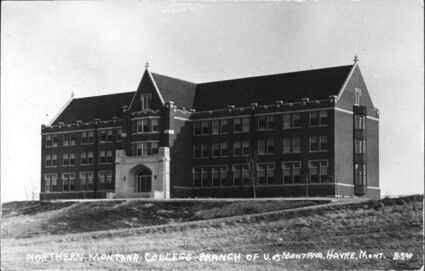 The completion of Pershing Hall in January 1934 gave some relief to the overcrowded classrooms of East Hall and the old junior high school, but the school continued to grow and expand the curricula, so space was still a problem. Plus, there were no dormitories; a women’s residence was a priority, with a social hall and dining hall.

Hence, there was little time for pride in accomplishment or appreciation of the financial and volunteer support received. Although the Havre Daily News quoted longtime booster, E.C. Carruth, who was the Havre member of the State Board of Education, along with operating a real estate and insurance business.

“This ends the 22-year efforts of the people of Havre, who with the help of state senators MacKenzie, Morris, Cowan and Clifford, though Governor’s Norris, Stewart, Dixon, Erickson and Cooney, put us on the educational map!”

Apparently in his exuberance he forgot that Governor Erickson had been proclaimed the enemy of northern Montana for vetoing several NMC funding bills.

Thus, before the paint was dry, President Guy H. Vande Bogart began the initial step of writing a letter to Harold T. Ickes, the new secretary of the interior, for funding through the new Public Works Administration under the new Roosevelt federal government. In the letter, Vande Bogart stressed that the college served the entire north country of eastern Montana, which was 25 percent larger than the state of Ohio, and they badly needed a women’s residence hall because of the long distances traveled.

The president also wrote of the rapid growth and support the school had received from local and regional sources. He concluded that with the new building the important educational work would continue — and more people employed.

The president’s letter started a chain of events that led to a grant/loan of $198,000, with Vande Bogart having joined with Montana’s U.S. representative and senators as the chief lobbyist.

The following March the firm of Lovering-Longbothan of St. Paul was the low bidder at $132,721. Elmer Johnson of Glasgow won the plumbing contract of $20,802. This left about $45,000 for furniture and equipment that the F.A. Buttrey Co. would obtain through the manufacturers.

The initial excavation work of the site’s foundation was completed under a different federal program.

“The building construction went rapidly,” said the NoMoCo school paper in the January 1936, “and the new women’s residence hall will be ready for occupancy by the first of next quarter,” adding that “the building will provide a center for the social life of the campus.”

The stately and modern new building was to be built in the location of the original 1920s building layout, designed by the Minneapolis landscaping engineers Morrell and Nichols. The Havre Daily News described the location as “on the hilltop just south of the Deaconess (Methodist) Hospital along the (original) Great Falls-Havre Highway.”

The building design again came from Havre architect and builder Frank Bossuot of the AIA Association, Montana Chapter. He was a longtime member on the college’s executive board with Dr. D.S. MacKenzie. Bossuot engineered and built the first Havre water and sewer system, and he also designed many schools, commercial and community buildings and homes along the Hi-Line and as far west as Spokane. Local examples of his work include the First Presbyterian Church, St. Mark’s Episcopal Church, St. Jude Catholic Church, the Hill County Courthouse and the first Havre High School.

His design was called Collegiate Revival Gothic. It was popular in the 19th and 20th centuries for school structures in the U.S. and Canada. It was said Bossuot got his inspiration from Deming Hall at the Rose Polytechnic School, 1874, at Terre Haute, Ind., although a similar building could be found at the Missoula state college.

The new building was described as “built from wire cut from Helena brick of Maroon and red-brown colors, combined with concrete and granite in the north entrance and steps.” The end bay windows were French in design, stretched in copper with a granite trim. The 160-foot by 41-foot building was built with a mechanical border, iron below the ground floor and went up three floors with a functional attic above.

With building costs soaring, cuts had to be made. The steep-peaked roof was originally supposed to be of copper, instead asbestos shingles were used; at places where oak was specified it was replaced with fir or pine. Pre-cast stone was replaced with granite trim. Anywhere a buck could be saved it was, whether with cheaper paint, or cheaer locks. At one point an auditorium/gymnasium had been proposed, but they simply didn’t have the room.

Although now empty, without heat and changed many times in the interior configuration, it indeed was a magnificent specimen of architecture.

The ground floor entrance opened onto the south overlooking the east-west gulch and Pershing Hall at the bottom with stairs leading to the first floor and restrooms on both sides. Among the rooms was a 114-person capacity dining room with a terrace and an adjacent kitchen, food storage and laundry areas; and too, living quarters for the kitchen staff. The west end contained the large, 24-foot by 40-foot recreation room, house mother’s office and a small “fudge” kitchen to prepare snacks during gatherings. The recreation room had the latest in “tubing style” furniture and beautiful, huge, white lighted spires clothed in silver. In earlier plans it showed a biology laboratory and classroom in that area.

When entering the first floor through the north, main entry people were met with “a spacious patterned terrazzo floored hallway” that was lighted with “tapered lights in simulated wrought-iron holders,” with a “long mahogany table in a refectory design” with two matching chairs. The reception and business office area was the first area encountered by the student once through the hallway that also included the switchboard. There was also men’s and women’s lounge areas with restrooms. Further to the southeast were student rooms.

The highlight of the first floor, though, was the oak floor 24-foot by 20-foot living room, or coed club, that occupied the west end. At first this was designated as the library, but again space restructuring ruined that idea.

The pillars and beamed ceiling were also of an oak finish and a fireplace in green tile. The chairs, davenports, love seats, drapes, wall paint and more were of deep rich colors of the rainbow making an elegant social setting, only matched by the chandeliers with golden globes. In addition, the west end included an infirmary and director’s suite.

The second and third floors contained the bulk of the double coed rooms, equipped with beds, washbowl, mirror, medicine cabinet, closets, built in book case and cabinet, closets, study chairs and more. Elsewhere on the floor were the toilets and bathrooms, and a dressing room with built-in ironing boards. The Dean of Women suite occupied part of the third floor. And, lastly, the attic was divided into sewing and storage rooms.

The building was originally scheduled for occupation in the summer of 1936, but delays in receiving the furnishings and equipment prevented it. Also, the drought, which caused a total crop failure hurt the fall enrollment. Thus, Vande Bogart had to explain to Secretary Ickes why their payment on the 80 percent loan was late.

But, as usual, the school persevered, the payments were made, the dormitory filled and then plans began for a men’s dormitory, vo-tech building and an administration building with classrooms.