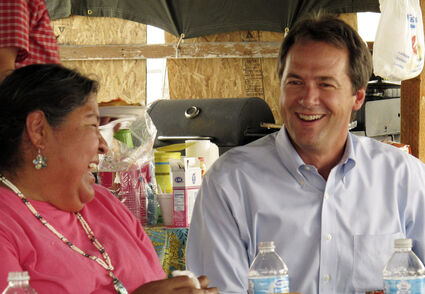 Democratic State Sen. Sharon Stewart-Peregoy, left, and Gov. Steve Bullock at the Crow Fair at Crow Agency, Mont. Bullock has stressed the importance of seeking collaboration during his first eight months in office.

Gov. Brian Schweitzer cast a presence over Montana politics that few could match. Bullock arrived in the governor's office in January as a seemingly reluctant heir to the spotlight.

Bullock tends to blend into the crowd, as he did on a recent visit to Glacier National Park's Many Glacier Hotel, where he wandered the gift shop with his young children, unrecognized by the tourists around him. Schweitzer, on the other hand, stoked and provoked crowds, as he did when he used a branding iron to set fire to bills he vetoed on the Capitol steps in 2011.

For some, the 47-year-old Bullock has represented a welcome change. But others lament the results have been the same as under Schweitzer, noting how Bullock finished the recent legislative session with a flurry of vetoes. Still, there is no doubt that Bullock's collaborative, somewhat cautious approach has been a stark contrast to Schweitzer's dominating, larger-than-life style.

A recent travel day provided a glimpse into the new governor's inclusive ways as his stops included the first oil field in the state to reuse greenhouse gasses to increase production, the nation's largest modern-day American Indian encampment and the home of the "world's best milkshakes."

Bullock started outside Broadus, lauding the opening of the state's first oil field to increase production by injecting carbon dioxide into the ground. He said the $350 million project indicated there can be common ground between environmentalists who want to reduce emissions and the industry leaders with whom they've often been at odds. Standing before massive buildings holding mammoth pumps and other equipment, Bullock proclaimed the technology as an example of the "need to bring people together to solve our biggest challenges."

From there he took a trip to town, stopping at the Sweet Shoppe in the Copper Moon gift and antique store for a coffee-flavored milkshake, which he diplomatically agreed "could be the world's best" as the owners proclaim.

Finally, he hopped a short flight to the Crow Indian Reservation for the annual Crow Fair, where he met with tribal leaders near a camp of more than 1,000 tepees in the southwest part of the state and deferentially addressed the large crowd after a previous speaker complained bitterly about state policies.

The careful approach has helped the former attorney general transition into power after winning election with less than 50 percent of the vote last year, a 49-47 victory over his Republican opponent.

Bullock immediately faced a Republican-led Legislature used to Schweitzer's heavy hand, but lawmakers from both sides initially applauded him for staying in the background as they crafted legislation. At the end, they weren't nearly so enthused after Bullock vetoed more than 70 bills and criticized them for overspending.

Still, Republican state Sen. Bruce Tutvedt called Bullock "a breath of fresh air." The Kalispell Republican said Bullock "is much more approachable" than Schweitzer "and seems to be willing to listen."

Tutvedt said he didn't agree with all of the vetoes, but "the governor has reached out and said he wants to discuss some of them and come back next session." He said he expects they will "find some positive results" next time around.

Veteran Democratic state Sen. Dave Wanzenried declined to make a direct comparison but said Bullock has impressed him as a thoughtful listener, willing to consider a range of viewpoints.

The Missoula Democrat who has seen many administrations, also is looking ahead, saying he hopes "we are going to find out more about" Bullock's objectives on health care and education "and more about his agenda for the next three-and-a-half years of his term in office."

For his part, Bullock has noted that both sides were able to reach some noteworthy agreements during the lawmaking session, including deals on freezing college tuition, cutting business equipment taxes, overhauling state pensions and increasing school funding.

Since taking office, Bullock has unveiled initiatives to dramatically increase the number of Montanans with college or technical degrees, invest in schools and early childhood education and a plan aimed at making Montana an easier place to do business. In each case, Bullock is characteristically enlisting panels and experts to flesh out the ultimate solution.

"I like the idea of being able to say in addition to signing bills, you are actually the CEO of 12,000 public servants. And they have great ideas, and we can work together to implement those ideas to make everyone proud of those services we provide," Bullock said. "So that is what I probably like most about (the job)."

Bullock, who was raised a few blocks from the Capitol and used to deliver the newspaper to the governor's mansion, said he is still not accustomed to the high profile nature of the office. And he is careful with the limelight.

"I think that I could always more constructively or better use the bully pulpit. But the bully pulpit is just one thing we can use to affect policy," Bullock said. "So I want to use it justly, too"

On that recent trip to the eastern Montana oil fields, he ran into the House Republican who led efforts to craft a budget that could get Democratic votes.

"Next time, you can use those big scissors on my bills," Ankney said.

But Bullock made it clear he would prefer avoid such confrontation, saying "maybe next time we can make them so I don't have to."