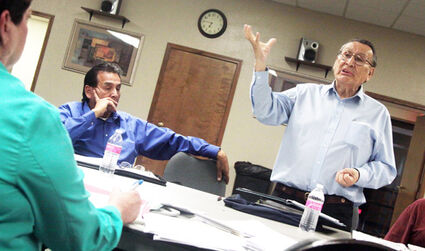 Gordon Monroe of Browning, a member of the Blackfeet Tribe who is fighting the tribal leadership, speaks Wednesday night in Havre to a group trying to form a reservation reform group.

A statewide organization of Native Americans to fight corruption on the state’s Indian reservations was formed at a meeting in Havre Wednesday night.

Representatives of five of seven reservations took part in the meeting at TownHouse Inn of Havre. People from the other two Indian reservations, Fort Beck and Northern Cheyenne, are also interested in taking part in the effort.

The consensus of Wednesday’s meeting was that corruption within reservations and violations of Native American civil rights are two of the biggest problems facing Montana Indians. Generally, the people represented dissident groups that have been fighting tribal power structures on their reservations.

They blamed corruption within the tribal leadership, lack of respect for Native American cultural values and the reluctance of the federal Bureau of Indian Affairs to do anything about thievery on reservations.

They will meet next week and define exactly what they think should be done.

Among other things, several Montana Native American leaders plan to speak in front of the U.S. Senate Select Subcommittee on Indian Affairs later this month.

Representatives of each reservation Wednesday night told their stories about problems on the reservations.

Old Chief said oil companies are unwilling to come into the reservation and provide much-needed revenue because of the disarray in tribal leadership.

Three Blackfeet members who spoke, blamed the problem on State Sen. Shannon Augare, a Blackfeet Tribal Council member. They said said he was a power behind the scenes.

Leon Veale, who has long been involved in the Blackfeet dissident movement, praised federal officials for charging Augare with driving under the influence, saying he was hiding behind Indian sovereignty laws in trying to avoid prosecution.

Well-intentioned people have been elected to tribal council, they said, but they have been forced out of office by the old guard.

When Rocky Boy’s Ken Blatt St. Marks, the host of the meeting, introduced himself, he said “I’m chairman of the Chippewa Cree Tribe ... then I’m not. Then I am. Then I’m not.”

He told the story of his disputes with the tribal establishment and their efforts to get him removed from office.

“When I was elected, I knew there was a little corruption that needs to be cleaned up,” he said. “I had no idea how much.”

He told the story of his decision to be cooperative with FBI and other investigative agencies and the reaction of other reservation leaders.

Cedric Black Eagle of the Crow Reservation spoke to the crowd via telephone.

He said there is growing discontent with corruption on reservations, and rank-and-file people are sick of being seen as corrupt.

But the Bureau of Indian Affairs has done nothing of combat corruption.

BIA has a $2.2 billion budget, he said. Out of every dollar, he said, 87 cents goes to pay for administrative costs. Thirteen cents goes to direct assistance to tribes.

There was especially discontent with BIA regional director Ed Parisian, a Rocky Boy native who oversees all Montana tribes except Flathead.

St. Marks said when he reported corrupt activities to Parisian, he told him there was nothing he could do because Rocky Boy was a sovereign nation.

“That’s not true,” he said. “I am a taxpayer, too, just like everybody else. This is my money being squandered.”

I wish these brilliant minds that have formed this committee would instead get together and figure out how our reservations can be self sustaining and not reliant on Government aid. Figure out how to create jobs and promote small business. If the majority of the reservation is unemployed and on assistance figure out how to take care of each other and not take handouts from the government. Start turning in and prosecuting drug dealers that poison our communities with Meth and pills. Disgusted....

It's interesting to read the comments that tribes are incompetent and/or can't manage funds. Even if ALL federal funds awarded to tribes were misspent ($5 billion at most), that doesn't even compare to federal agencies like the Department of Defense, Department of Agriculture, etc. I'm not trying to excuse tribes who've been proven guilty, I'm just trying to put it into perspective. Corruption and misspending isn't just happening within tribal governments.

Cut all this grant money 100% to these reservations, let them make their own way like the rest of us. Prosecute all involved with maximum sentences .

Well done getting something started. Tribes are using sovereignty as a club to beat the weak and helpless. At Original Pechanga's Blog, we have been telling the stories of tribal corruption in CA for years. You must be visible, and vocal. We just came back from Washington DC, meeting with Congressional staffers against a water rights bill that harms allottees. http://originalpechanga.com FIGHT FOR YOUR RIGHTS

I agree with Sure...like the former council guys in this pic... Jesus said...Let HE who hath NO SIN, cast the first stone, They had their heyday on counci doing exactly as SURE said...HYPOCRITES.

Grammar? That's your contribution to this subject?

Can you please grammar check your work before publishing.

The only difference between these people is one group is in office and the other isn't. Kenny St Marks was on the inside once, now he attacks the system he once exploited. In one word: hypocrite.