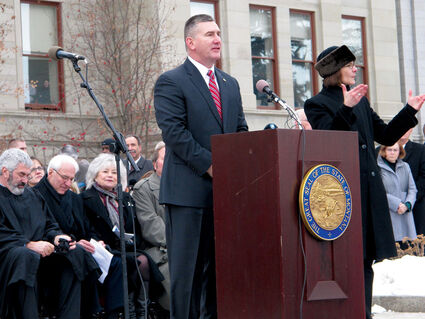 Montana Lt. Gov. John Walsh speaks Jan. 7 in Helena after his inauguration. Walsh announced his candidacy today for the U.S. Senate seat being vacated by Sen. Max Baucus, D-Mont., after next year.

HELENA — Montana Lt. Gov. John Walsh said today he will run for the U.S. Senate in 2014, giving Democrats the high-profile candidate they've been scrambling for in a bid to keep the seat they've held for decades.

Walsh told supporters this morning with a video message that he will run for the office that has been the focus of a great deal of speculation since Sen. Max Baucus announced earlier this year that he will retire at the end of 2014.

The announcement said the 52-year-old former Montana National Guard commander is running because Washington needs more leaders with a "sense of duty" to do what's right.

"Too many lawmakers back in Washington put their own agendas ahead of their responsibility to their constituents and to all Americans," Walsh said. "They put their political party, and their personal careers ahead of the people they are supposed to be representing. They've forgotten their obligations and responsibilities."

Walsh was one of three high-profile speakers at the Hill County Democrats Pasma-Peck fundraising dinner during Festival Days and mentioned his background and talked about work he said he and Gov. Steve Bullock had done to improve conditions in the state. Walsh also called on Democrats to send more legislators to Helena, but did not talk about his potential candidacy in the Senate race.

Former Lt. Gov. John Bohlinger, who is exploring declaring himself as a candidate in the race, also spoke at the Pasma-Peck Dinner, but did not declare he would run.

The other who spoke at the dinner about the Senate race was Democratic candidate Dirk Adams, an out-of-state attorney and former banker who bought a ranch in Park County north of Livingston in 1984 and has ranched there ever since. At the dinner, he was the only declared Senate candidate to speak.

The up-in-the-air Montana race could help determine control of the Senate.

Republicans, who like their chances in the GOP-leaning state, need to pick up six seats to recapture the Senate majority and are trying to take advantage of geography and history in their quest.

Democrats must defend 21 seats, including seven in largely rural states that President Barack Obama lost in 2012, and the party that controls the White House typically loses seats during the midterm elections of a second-term president.

Baucus shocked Montana politics when he announced in April he would not seek a seventh term despite a large campaign war chest and no serious announced opposition. Baucus, who in recent years has bemoaned increased polarization in Washington, said he was walking from chairmanship of the Senate Finance Committee and high-ranking seniority so that he could enjoy a life outside of politics for the first time since the early 1970s.

The announcement created a scramble for candidates on both sides and a free-for-all for the first open Senate seat in the state since 1978.

Several statewide elected Democrats — and the man once assumed to be the front-runner in the 2014 race, former Gov. Brian Schweitzer — have spurned recruitment efforts.

Many Republicans expect U.S. Rep. Steve Daines will enter the race as their front-runner. Daines has been raising money consistent with a Senate run and has said he could announce his decision fairly soon.

Former Gov. Marc Racicot, who used to chair the Republican National Committee, rejected a run of his and encouraged Daines to enter the race.

Edmunds has said that if Daines runs for the Senate seat, he will switch to run for Daines seat in the House.

Former state legislator Corey Stapleton of Billings announced Sept. 3 he was doing just that. Stapleton, a Republican gubernatorial candidate in 2012, switched from the Senate race to the House.

Walsh, the former adjutant general who has said he never considered a run before Schweitzer bowed out, enters the race with just one election under his belt. He won a tight race last year as Bullock's running mate.

He has two grown children with his wife, Janet, and a grandchild.

Walsh, a native of the Democratic stronghold of Butte, touted his long military career and promised to put politics aside in the Senate.

"I'm not a politician. I'm a soldier. I'm a fourth-generation Montanan from Butte," a message for supporters said. "For all our children and grandchildren, Montana deserves leaders who will live up to their obligations, put service ahead of self, and have the courage to make the tough decisions while protecting the vulnerable."