Daines maintains that Senate must negotiate 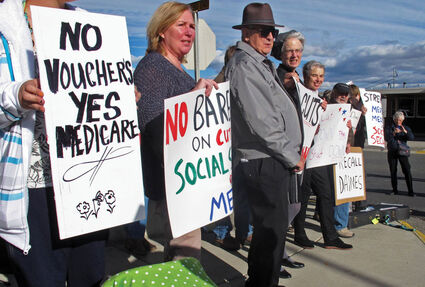 Protesters upset with the ongoing federal government shutdown and what they fear could lead to Social Security benefit reductions rally Tuesday outside Republican U.S. Rep. Steve Daines' office in Helena. See page A2 for more on Montana representatives and the shutdown.

HELENA — Republican U.S. Rep. Steve Daines said Tuesday that he is not interested in talking about continued funding for the federal government until Democrats agree to talk about spending cuts.

U.S. Sen. Jon Tester, in an interview, countered that Daines and other House Republicans need to pass the funding resolution that is before the chamber and stop trying to make hostages of federal programs.

The partial government shutdown is in its eighth day with little or no talk of an immediate end. An estimated 450,000 federal workers have been idled at agencies responsible for items as diverse as food inspection and running national parks.

The threat of a default looms, even though both sides agreed that would be a catastrophic outcome.

Daines said in an interview with The Associated Press that the Senate and the president must be willing to negotiate items sought by Republicans. The House freshman said it is irresponsible for President Barack Obama to refuse.

"It is not clear to me what the outcome is going to be. I do know, and I am hearing this from Montanans and virtually all of America, they expect their elected leaders to come together and talk and find solutions," Daines said.

Getting the Senate and the president to the table is the first step toward resolving the stalemate, he said.

Democrats argue that Republicans must agree to reopen the government and allow the country to borrow more money to pay for obligations and laws passed by Congress.

Tester said Republicans continue to change demands, with little in the way of specifics and far too much at stake.

"It started out with the Affordable Care Act, and then they said it needs something more to do with the debt, and today they are talking sequestration," the Democrat said. "This is not a way for them to run a legislative branch, to say if you don't get your way, you take your ball and go home."

Tester said negotiations over spending, debt and taxes have taken place and need to continue during the budgeting process — and not under the threat of default. Tester said he would eventually like to see a fully developed conversation with Republicans on all the issues it would take to balance the budget, and blamed the GOP for avoiding a reasonable conversation in the past.

"Let's put everything on the table including revenue and including cuts and let's figure it out," Tester said. "You don't do it by saying we are going to put the whole good faith and credit of the government at risk."

U.S. Sen. Max Baucus, in a statement, echoed Tester's comments and said the House needs to vote on the bill before it.

"This nonsense has gone on long enough," the Democrat said.

Also Tuesday, about three dozen protesters with a liberal advocacy group called the Montana Organizing Project held signs outside Daines' office in Helena urging an end to a default they feared could threaten programs like Social Security.

Daines said that "nobody here in Washington wants to hear default."

"It would be irresponsible to default and it would cause great harm to our country and economy," Daines said. "It is also irresponsible to raise the debt limit without addressing Washington's out-of-control spending."

Daines, considered a likely top candidate for the U.S. Senate seat being vacated by Max Baucus, said the imbroglio isn't affecting his stance.

"I ran for Congress to serve the people of Montana. And I ran to have the courage and leadership to address the issues facing this county," Daines said. "It would be irresponsible to raise the debt limit without resolving the underlying problems that led to this crisis."

you go girl! I hope this shutdown lasts for at least three months.