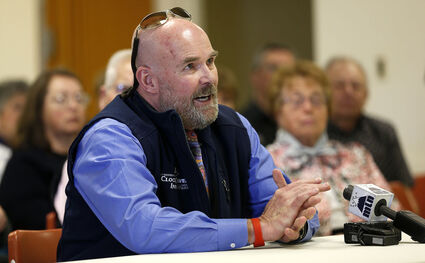 Steve Wahrlich, of Billings, who once employed Barry Beach, speaks in support of Beach to the Board of Pardons and Parole, as the board considers Beach's clemency request, in Deer Lodge, Tuesday.

DEER LODGE - Montana's parole board has the chance to correct a mistake made when Barry Beach was sentenced to 100 years in prison without parole in the 1979 beating death of a high school classmate, his attorneys said Tuesday.

Science and the courts had not yet realized that a juvenile criminal had capacity to change when Beach was convicted in 1984, attorney Terry Toavs told three members of the Montana Board of Pardons and Parole in a hearing in Deer Lodge.

Beach and the victim, Kim Nees, were both 17 at the time of her slaying in Poplar.

Now, young criminals can't be sentenced to life in prison without the possibility of parole following a 2012 U.S. Supreme Court decision. When Beach was convicted, the view was that if you do the adult crime, you do the adult time, Toavs said.

"That premise has now been scientifically proven to have been false," he said. "You cannot predict the future criminality of a juvenile offender."

Seventeen people echoed Toavs' arguments, speaking on Beach's behalf at the parole board's review of his application for clemency.

Beach is not arguing his innocence in Nees' death, but that circumstances have changed since his last clemency request was rejected in 2007 and that he should be given the opportunity to be paroled.

Not just the scientific research and the approach to sentencing juveniles have changed, but Beach showed model behavior both inside prison and when a judge released him in 2011, supporters said.

Beach went free when District Judge E. Wayne Phillips ordered a new trial after a hearing in which witnesses testified that Nees' death may have been caused by a fight among a gang of girls.

The Montana Supreme Court overturned that order after finding problems with the testimony and sent Beach back to prison about a year ago.

Beach was not present at Monday's hearing before 60 people in the Powell County Community Center. Neither was Nees' family or the state prosecutors who oppose commuting Beach's sentence.

But the family has submitted written comment opposing clemency. State attorneys have filed a 3-inch book laying out its case against clemency, but Gov. Steve Bullock sent a letter to the board last week asking members to consider the application and Beach's circumstances.

If the board accepts Beach's application, it will hold a full clemency hearing, chairman Mike McKee said. If it doesn't, Beach must continue to serve his prison sentence.

McKee said he hopes the full seven-member board will make a decision by the end of May.

People traveled from across Montana to Deer Lodge to tell the board that Beach deserves another chance at freedom. They included people who housed, employed and befriended Beach when he was released in 2011. They told personal stories of having Beach to dinner, hiring him for jobs and even taking him waterskiing.

Some told the board that Beach could live with them if he was released. Others offered him jobs.

He has proven that he can be an asset to the community during his release, said friend Robert Kolar of Helena.

"Let him prove it for a second time," he said.

Only one person spoke against Beach's release. Flathead County Attorney Ed Corrigan of Kalispell said he understands the changes to juvenile sentences, but the board must consider the crime Beach committed.

"Mr. Beach has been convicted of a horrific, brutal murder of a teenage girl," Corrigan said. "It is not the type of crime for which clemency should be granted."