Blue Ponies to lay it on the line in Belgrade 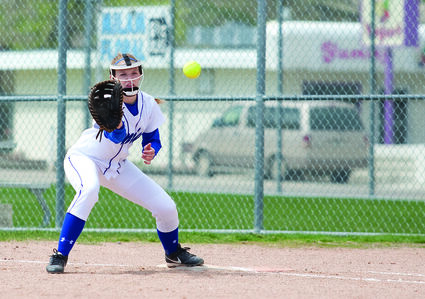 Havre first baseman Harlee Boucher goes to catch a throw during a Central A softball game against Livingston last week in Havre. The Blue Ponies head to the Central A Divisional tournament Friday and Saturday in Belgrade.

Now that the Havre High softball team is in the postseason, it is time to take care of a goal the Central A Blue Ponies have had for several years now: getting back to an elite level and competing for a Class A state title.

The Ponies finished the season with a 3-5 conference record and enter the second annual Central A Divisional tournament as the No. 4 seed. The Belgrade Panthers are the No. 1 seed, followed by the No. 2 Lewistown Golden Eagles and No. 3 Livingston Rangers. The Browning Indians were winless in conference play and enter as the No. 5 seed. The conference rivals will face off Friday and Saturday in Belgrade.

And the Ponies will open up the tournament Friday when they face the Indians. If HHS can beat the Indians for a third time this season, the Ponies will have to face No. 1 Belgrade in the semifinals Saturday. Havre swept the Indians during the regular season, but were swept by the Panthers this regular season. That doesn't seem to matter to the Ponies, as they are confident they will easily get past the winless Indians, as well as match up well with the rest of the higher-seeded conference rivals.

"We are going to beat Browning and play Belgrade," Havre High head coach Danny Wirtzberger said. "I give Browning credit, and I appreciate they are out there competing, but they aren't going to beat us. And I think we matchup really, really well with Belgrade. On the road we played them for several innings to a zero-zero ballgame and we just couldn't compact hits on top of each other. I think we solved that issue. If I had to pick any team to coach, I would still pick us."

Getting by last-place Browning won't be an issue for the Ponies. But defeating the Panthers will be a much tougher task for Havre. Belgrade defeated the Ponies 8-2 and 12-2 in Belgrade this year, but the Ponies narrowly missed out on what could have been a historic split. In game one of the doubleheader the game was locked up at 0-0 until the fifth inning, an inning where the Panthers rallied to take a 5-0 lead. The late letup turned into an 8-2 loss for the Ponies, but also proved the Ponies could compete with the top-seeded Panthers if playing well. Majeres pitched well, but suffered both losses. Majeres has also been very consistent as of late, but hits and runs will still be the Ponies' best option if they want to pull out the win.

"We aren't going to shut anybody out," Wirtzberger said. "We are going to need eight, nine, or even 10 runs to beat Belgrade, and we are working on how to do that. We are also working on how to keep Belgrade below that, and it starts with being in the game with every pitch, and coaches putting players where they can be most successful."

Majeres, along with her pitching, leads the HHS offense at the plate. Dani Wagner is second on the team with her batting average, while Paige Henderson rounds off the top three batters for the Ponies. Scout Boucher has a standout on-base percentage, but the Ponies also need good production from Sydne Huston, Harlee Boucher, Shania Carlson, Tori Mazurkiewicz, Morgan Mazurkiewicz, Jordyn Warren and China Bohn. But facing Belgrade's Taylor or Jordan Branch in the pitching circle, the hits won't be an easy task against a solid duo.

"I know they (Majeres, Wagner and Henderson) will perform at the plate," Wirtzberger said. "And I expect them to play well again this weekend. But what could really make the difference is the middle of our lineup making the pitcher throw a lot of pitches, and if they get some hits too, that is just gravy."

HHS likes its chances to getting to the state tournament this year, no matter who the Ponies play. If the Ponies win or lose, they will face the winner or loser of the Lewistown-Livingston matchup. The only difference could be whether or not the Ponies are playing in the championship game, or playing for their season in the loser-out bracket.

The Ponies split with Lewistown this year. But Livingston swept the Ponies 8-5 and 12-9 in Havre. But the Ponies think they have what it takes to take down either foe. They know they have to play extremely well this weekend, but the state tournament is within reach. Though Havre went 1-3 collectively against the Rangers and Eagles, the Ponies proved they could be competitive and be the better team even without playing a complete game.

"I hate to put a lot of pressure on our girls," coach Wirtzberger said. "But if we play our best ball, there is no reason that we shouldn't be competing at the state tournament this year. I don't think teams are too excited to play us at divisionals and that is what we want. And what is scary about us is that we haven't played a complete game yet this year. We have always had our one bad inning, or we have had our woes at the plate. If we can pull a complete game tougher this weekend, which I hope we do, then we should be pretty good."

Friday the Ponies will open the Central A Divisional tournament in Belgrade against Browning. The Central A tourney wraps up Saturday, with the top three teams advancing to the Class A state tournament next weekend in Polson.