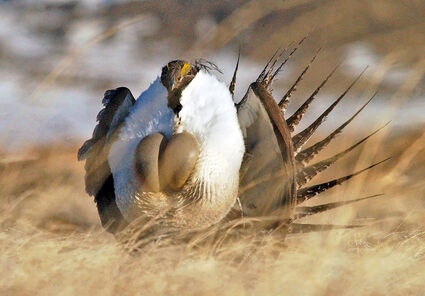 A male sage grouse performs his "strut" near Rawlins, Wyo. in this file photo.

BILLINGS (AP) - Montana is joining North Dakota and South Dakota as states that plan to curtail sage grouse hunting in response to a continued decline in the game bird's population.

Montana wildlife commissioners on Thursday gave tentative approval to a proposal to cancel or scale back a two-month hunting season slated to open in September.

Hunting advocates strongly oppose a closure, and Fish and Wildlife Commission Chairman Dan Vermillion says less drastic measures are still on the table. Those include shortening the season or limiting how many birds a hunter can shoot.

A final vote is expected in July.

The U.S. Fish and Wildlife Service is under a 2015 deadline to decide if the chicken-sized, ground-dwelling bird needs sweeping federal protections.