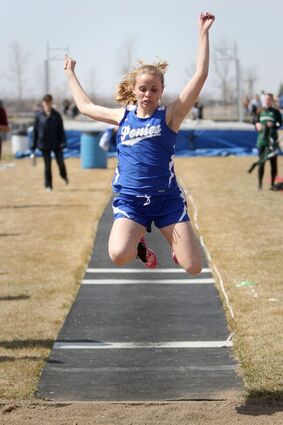 Havre High's Naomi Terry leaps toward the long jump pit during the Lions Havre Invitational last month. The Havre High girls will gun for a team title at the Central A track meet today and Saturday at the Havre Middle School Track.

Now that the postseason is getting underway, it is time for the Havre High girls track and field team to see what they can accomplish after some much-needed rest.

Late in the season the Central A Blue Pony girls ran into some injuries and sickness. But after a week of rest heading into this weekend's Central A Divisional meet in Havre, the HHS girls should be able to turn in several top times and distances against the rest of the Central A. Today and Saturday the Belgrade Panthers, Lewistown Golden Eagles, Livingston Rangers and Browning Indians will join the Ponies at the Havre Middle School track for divisional action.

Late in the season some of the Ponies top point getters were riddled with nagging injuries. With some runners battling through shin splints, senior Peyton Filius was battling through an old foot injury. But after some time off leading up to divisionals, the Ponies should be back to nearly full strength.

"They should be well rested, and we should be OK," Havre High head coach John Ita said. "They feel like they are ready to come back after some days off, and you really can't beat fresh legs. Our girls compete hard, but they train just as hard, so they kind of beat themselves up going for personal bests and places. After the time off, I really think we will be OK."

A year ago the Blue Ponies finished the divisional meet in third place behind first-place Belgrade and second-place Lewistown. And this year, it looks like the rest of the field will be chasing the Panthers yet again. Belgrade is too deep and too talented to be truly tested before the state meet, leaving the rest of the Central A fighting it out for a second-place finish. And the HHS girls have several athletes who could give the Ponies the edge.

But the Ponies will also be in the hunt for points in the sprints and field events.

Lacey Waid will also run a leg in the short relay, but is a strong favorite to win the pole vault. Waid has set a new HHS school record with a height of 10-6 this season, and won every meet she competed in except for the Top 10, where she came in second. Waid's finishes could be crucial to landing the Ponies in second place as a team.

"Belgrade can pack five kids into each event," Ita said. "But they also have talent in those numbers. They have very good girls triple jumpers, high jumpers, they have speed, they have talent in the middle distance and distance, and can throw. I am really hoping everything falls into place, and we can pick up points in events like the 200 and hurdles. We should be in a good position to compete for second place, but if we lost Martha Stocker, then we will really need to step up and find some points in other places."

Athletes like Plante (jumps) and Rennick (throws) could play crucial roles in garnering extra points, as they have both shown a lot of improvement from the beginning of the season to now.

Today and Saturday the Ponies will host the Central A divisional track meet at the Havre Middle School track in Havre. The meet starts today at 4, and resumes Saturday at 10 a.m. The top six athletes and relay teams in each event advance to next week's Class A state meet in Butte.