Havre boys look to grab a Central A trophy 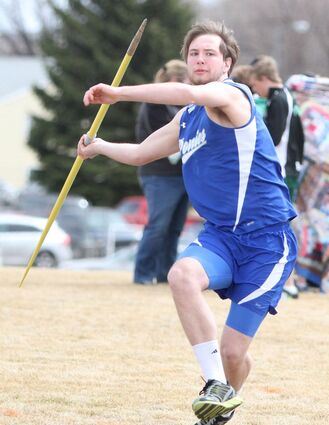 Havre High senior Kade Rismon throws the javelin at the Cal Wearly Invitational last month in Havre. Rismon is one of the top throwers in the Central A heading into this weekend's divisional track meet at the Havre Middle School Track.

It is always tough to compete with the best track programs in the conference when a team doesn't quite have the same numbers and depth. But the Havre High boys track and field team has produced some solid marks and times this season, and will put it all on the line this weekend in Havre.

It will be a battle for the Ponies as they host the Belgrade Panthers, Lewistown Golden Eagles, Livingston Rangers and Browning Indians, but the Ponies know they have some top individual talent as well. Head coach John Ita is sure the Panthers are favored to win the team title yet again, but the Ponies are still looking to build off of last year's fourth-place finish. This year could prove to be a very tight race between the Ponies, Rangers and Eagles in the hunt for second place.

"They (Belgrade) have very strong hurdles runners and throwers especially, but overall, they are just a quality team with a deep roster," Ita said. "The real race here is going to be between us, Lewistown and Livingston for second place. Wherever we can sneak or steal points, that is what we are going to try and do this weekend. Everybody seems to have their strengths, so whenever we can sneak in a fifth or fourth place, that will really benefit us."

Nate Rismon will compete in the 200, 400, pole vault, long jump, triple jump and both relays. He has cleared 10-2 in the pole vault as the third-best vaulter for the Ponies, but has leaped over 20 feet in the long jump and more than 40 feet in the triple jump. Thomas Gruber is the No. 1 vaulter for the Ponies, and has a shot at a great weekend after clearing 13-0 this season. Gruber will also run a leg in the short relay. Gunnar Aageson is also a threat for points in the pole vault (12-0), and will run the 200 for the Ponies.

Another point-getter might be freshman Mike Loftus. Loftus has been out of the lineup the last several meets but is expected to return just in time for divisionals. Loftus will run the 100, 200, 400 and both relays. 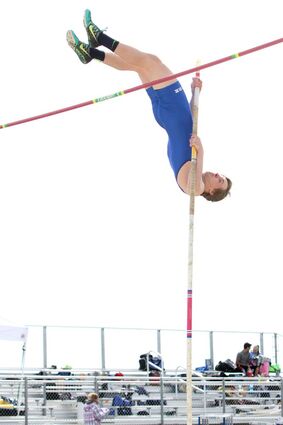 Havre's Gunnar Aageson should contend for the pole vault title at the Central A Divisional track meet, which runs today and Saturday at the Havre Middle School Track.

"I am hoping we can do well in the throws," Ita said. "But we have also been giving Nate Rismon more events, and we are hoping he can earn points in the jumps, 200 and 400. It would be nice if he could earn a top spot in a couple of his events. But our pole vaulters should be near the top once again. Thomas Gruber has a real shot at doing very well, but we also have Gunnar Aageson who has stepped up this season as well. We are just trying to find points and steal points wherever we can, and that is what we have to do without the same numbers as teams like Belgrade."

Today and Saturday the Ponies will host the Central A divisional track meet at the Havre Middle School track in Havre. The meet starts today at 4, and resumes Saturday at 10 a.m. The top six athletes and relay teams in each event at the Central A advance to next week's Class A state meet in Butte.