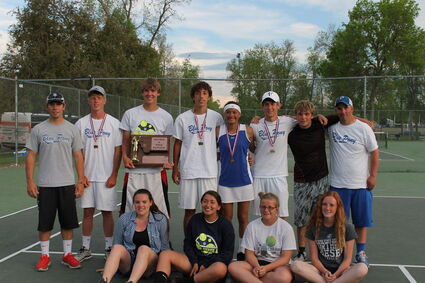 It wasn’t that long ago that state championships, medals and hardware were second nature to the Havre High tennis teams. And the Blue Ponies got back to that kind of success in a big way this past weekend at the Class A state tournament in Billings.

Havre High sophomore Jeff Miller captured the Class A singles state championship Friday afternoon in Billings, becoming the fourth Blue Pony to win a boys singles championship. Miller’s win over Corvallis’ D.J. Pekoc, who was forced to retire in the third set with a leg injury, combined with the efforts of seniors Brian Smith and Ned Malone in doubles, helped catapult the HHS boys to a third-place trophy as well. Havre finished with 21 points, just one point behind second-place Corvallis and just seven behind state champion Billings Central.

The Ponies also got 10 points from senior Brandy Lambourne on the girls side. Lambourne finished in third place in girls singles, and her two days in Billings left Havre with an outstanding fifth-place finish.

“Magical, special, emotional, those are the words that I would choose to describe the state tournament,” said HHS head coach George Ferguson, who has now led Havre tennis teams to 14 different top three finishes at the state tournament. “We had a state champion, we had medals in boys doubles and girls singles. We brought home a trophy, and put ourselves in a position to compete for a boys team title and a girls trophy. So it’s all smiles for me. I just couldn’t be more proud of the nine kids we took to the state tournament. They played great tennis and they made memories for themselves that will last a lifetime. It’s all about them, the kids. And the kids were amazing this weekend.”

Miller’s state championship in singles came in an unusual circumstance, but one that Ferguson said is an unfortunate part of sports, and especially tennis. After dropping the first set to Pekoc 6-3, Miller rallied to win the second set 7-5, and force a decisive third set. By that time, Pekoc had shown signs of cramping, and had taken several injury time-outs to try and work through it. Pekoc then looked sharp at the start of the third, and the set was on serve 2-3 when Pekoc again cramped up. This time, he felt he could no longer continue, and he, Miller, and both coaching staff’s met at the net, and the match was over. With the win, Miller joined Ferguson’s brother Dan, Abe Mikota and four-time champion Kyle Baltrusch as the only players to ever win a singles state championship in HHS boys history. Miller got to the final by beating rival Brady Hislop of Polson in the semifinals earlier Friday. In a gutsy effort, Miller erased an 0-6 loss in the first set, and beat Hislop 6-2, 6-2 in the next two sets to advance to his first title match.

“It’s not the way any of us envisioned Jeff’s first state championship ending,” Ferguson said. “And I say first, because winning a state title has always been his goal, and I’ve always believed he would win one, and probably more than one. But, injuries are a part of sports, and with the heat we were playing in, cramping issues are a big part of tennis. So I’m guessing D.J. (Pekoc) felt like he wasn’t going to be able to finish the match and if he continued to try, things would have just gotten worse with his legs. So first and foremost, I’d like to say that I have a tremendous amount of respect for D.J. Pekoc. He’s a two-time state champion, he’s a great tennis player, and I know it was very hard to do what he did. It took a tremendous amount of courage for him to walk away from that match like he did, and my heart goes out to him because you don’t like to see kids hurt like that.

“On the flip side of that coin, I couldn’t be more happy for Jeff Miller and more proud of him,” Ferguson continued. “Jeff has put his heart, body and soul into the sport of tennis, and this has been his dream for a long, long time. Jeff played like a champion from the start of the tournament on Thursday to the final point against D.J. His win in the semifinals was one of the biggest comebacks I’ve ever witnessed. And that shows that Jeff is not just an elite tennis player, but he has a huge heart and that he’s a fighter, because he could have mailed it in right there, and none of this would have been possible at that point. Jeff played the kind of tennis state champions play this weekend, and he deserves to be sitting on top of a group of elite Class A players. He earned it, through all of his hard work over the years, the dominating season he put together this year, and with the level of play he displayed this weekend in Billings. He’s just a great, great tennis player, and now he’s a state champion. Now he’s the best Class A tennis player in Montana, and that’s a very special feeling. I’m just so happy for him and so proud of him.”

Miller’s state championship was backed up by a stellar showing by Malone and Smith in doubles. The duo won two big matches Thursday before falling to eventual state champions John Knisley and Harrison Fagg of Billings Central. But, after a gut-wrenching loss to a standout team from Polson in the consolation semifinals, Malone and Smith saved their best for last. With the Ponies locked in a tie with both Polson and Glendive, Malone and Smith delivered Havre its first state trophy since 2010 as they beat Libby’s Jason Schnackenberg and Cody Wood in a three-set thriller in the fifth-sixth place match. The win was worth one extra place point and it catapulted Havre to its best finish in quite some time.

“I don’t even know what to say about Ned and Brian,” Ferguson said. “What they did this weekend was remarkable, and the run they’ve been on the last two weeks has been very special. These are two guys who had never played doubles together before the start of this season. Ned had never played competitive doubles at all, and neither of them had been to a state tournament before. And yet here they are. They are All-State and divisional champions and they won us the point that got us a trophy. They couldn’t have finished their Havre High careers any better and there are no two players more deserving of this then they are. I’m so proud of those two guys. Simply awesome.”

Awesome is a word to describe what Lambourne did in Billings, too. The Pony senior had been to the previous two state tournaments, but this weekend, she finished with a vengeance. After a pair of wins Thursday, Lambourne faced off against eventual state champion Laramie McHugh of Corvallis in the semifinals. And while McHugh was dominant early, Lambourne pushed back, winning the second set in a tiebreaker before falling in the third set, 6-3. Lambourne came right back to defeat another Corvallis foe in the consolation semifinals, then took care of Columbia Falls’ Emily Getts, 6-4, 6-4 in consolation final.

“Brandy started this season with the goal of being one of the best players in the state,” Ferguson said. “And she came to Billings with the same goal. She wanted to win a state championship, but more than that, Brandy wanted to play the best tennis of her career, and prove she was one of the top players in the tournament. And she accomplished that mission. She was so close to playing for the title, but after that match, I told her, just go out and win two more and finish what you came here to do. And she did it.

“Brandy has been a special talent for the last four years,” he continued. “And while everyone knows her as a star basketball player, and rightfully so, she proved this weekend that she is one of the very best girl’s tennis players in Class A. She ended her career exactly how she wanted, as a winner, and it’s not at all surprising because that’s what Brandy is, she’s a winner. And she’s also a great tennis player, and I’m just so proud of her.”

Havre’s girls came up short in the trophy hunt, as both the senior doubles duo of Breck Don and Ellery Bresler and junior Tatiana Ralph went winless in Billings. On the boys side, the tandem of Noah Landgraf and Wyatt Lindbloom also lost twice on Thursday, and while Ferguson says he felt for those competitors, there was little that could take away from what a great state tournament it was for Havre High tennis.

“In an individual sport, not everyone finds success,” Ferguson said. “And it was particularly hard to watch Breck and Ellery have to have their great career end like that. Those two have been such a big part of our girls program, and I am very sad to see them go. But I was proud of all of our kids, win or lose. They represented Havre High tennis extremely well, and they all gave me their very best this weekend, and I can’t ask for anything more than that.

“And it really was a great weekend,” Ferguson continued. “To bring home a boys trophy, and to have the individual medals we got, it is very special. The nine kids who went to Billings made it a very special weekend, and this is a state tournament I will never forget.”