Blue Ponies ready for the next level 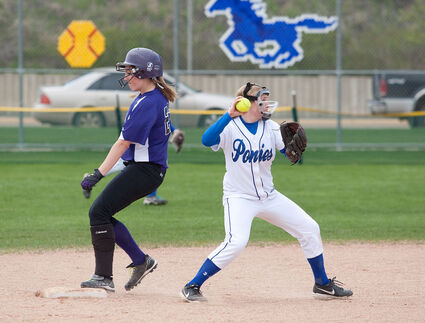 Havre High's Tori Mazurkiewicz looks to throw out a runner during a Central A softball game earlier this month in Havre. The Blue Ponies arethe No. 3 seed from the Central A at this weekend's State A tournament in Polson.

Over the last five years, the Havre High softball program was turning in gear by this point in the season, but after a stellar divisional tournament, and a third-place finish in the Central A, the Blue Ponies are making their way back to the Class A state tournament.

This year the state tournament will be played Thursday, Friday and Saturday in Polson.

And entering as a No. 3 seed, the Ponies know the field of competitors will be deep and talented. No. 1 seeds include Billings Central, Frenchtown, Hamilton and Belgrade, while No. 2 seeds include Livingston, Miles City, Polson and Butte Central. Joining Havre as a three seed is Anaconda, Laurel and Libby. The Ponies will play the second game of the tournament Thursday at 11 a.m. against the Miles City Cowboys. If the Ponies win their opening matchup, they will face Frenchtown Thursday at 3 p.m., and if the Ponies lose they will either face Belgrade, Butte Central or Libby in the loser out bracket Friday at 11 a.m.

“I have seen Miles City play, but I don’t know too much about their squad,” Havre High head coach Danny Wirtzberger said. “I wasn’t really scouting them yet, I was still just worried about the teams in our conference. But right now the question to our girls is why not us? We made it to the state tournament and we have a chance to be a state champion just like all of these other teams, so why not us? We are as good as every other team that is here, and we are here, and we have shown we can compete with anybody.”

Miles City is a talented program and the Cowboys may have caught fire at the perfect time.

Last weekend at the divisional tournament, the Cowboys beat Hardin 4-3 in the first round, then upset second seeded Laurel 7-2 to get into the championship and eventually earn a No. 2 seed. And with players like Lauren Wolfe-Petroff, Sierra Niedge, Mackenzie Helland, Gabby Richards, Tori Ogolin, Madissen Hill and Henna Swope, the Cowboys will be a tough matchup for anybody this weekend as well. Wolfe-Petroff is a talented pitcher that could give the HHS offense some trouble if she is firing on all cylinders.

If the Ponies hope to get past Miles City and advance deep into the weekend, they have to play well all around, and across the entire lineup. 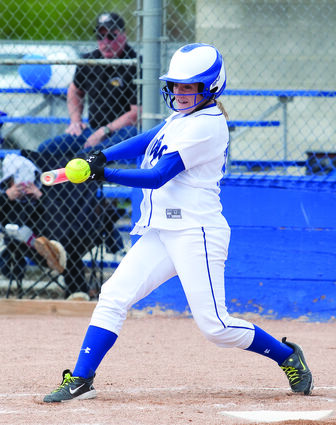 Havre High's Rachel Majeres takes a swing during a Central A softball game earlier this month in Havre. Majeres and the Blue Ponies will head to the Class A state tournament Thursday-Saturday in Polson. Havre, which hasn't been to the state tournament in five seasons, finished third at last weekend's Central A tournament in Belgrade and will play Miles City Thursday morning.

Rachel Majeres has solidified herself as the ace pitcher this season, while also a leader of the offense with her bat and extra base hit capabilities. Dani Wagner (center field) and Paige Henderson (short stop) are also leading the offense this season, while also play very key roles in the HHS defense, a defense that struggled with errors early this season, but has made great strides in that department as of late. Wagner and Tori Mazurkiewicz might also have to step in and help with the pitching duties if Majeres hits a wall. Majeres pitched extremely well at the divisional tournament last weekend, but did show signs of fatigue late in the weekend But if Majeres is on, she can throw a lot of strikes and get the ball in play, giving the defense the chance to shine behind her.

If Morgan Mazurkiewicz, Tori Mazurkiewicz, Shania Carlson and Jordyn Warren can also get the bats going, the Ponies should be able to get the run support necessary to get some wins. Coach Wirtzberger has said it all season long; the Ponies aren’t a team that can shut out a lot of teams. To earn wins the Ponies have found they need to score around eight or nine runs per game.

If the Ponies can play a clean game, limit their mistakes and get the bats going, they like their chance against anybody.

“We are emphasizing teamwork,” Wirtzberger said. “And looking at the player next to you and leaning on them. The girls have accomplished so much this year already, so I can’t wait to see what they can do at the state tournament.”