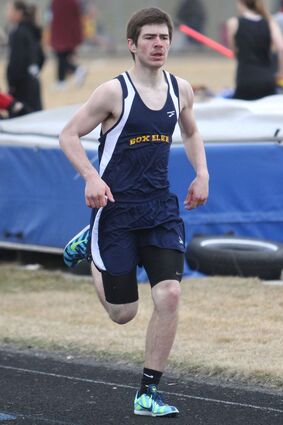 Box Elder senior Will Ketchum is a heavy favorite to capture Class C state championships in the two grueling distance races this weekend in Great Falls. Winning state gold is something Ketchum has been running towards for four years, if not longer.

Thinking back over the last several state track meets, it is hard to think of a time when the Hi-Line wasn't sending an exciting and explosive talent to compete against the best of the best.

And there have been some greats in recent history, including several names from the North Star girls team, Kourtney Danreuther from Big Sandy, Kellen Warren from North Star, and even Sammy Evans from Havre High.

This year I think that special athlete is Box Elder's own Will Ketchum.

Ketchum has been a star for the 9C Bears since his freshman year, and he has only gotten better with each passing race and each passing season. But gold and state supremacy still elude the senior, though he has shown dominance as a distance runner every regular season, 9C weekend, and Northern C weekend. Last year he got somewhat close to clinching a No. 1 finish at the state level, but still came up short. In the 1,600-meter run he ran an impressive time of 4:34.82, but that only got him into fifth place. And in the 3,200-meter run he ran another impressive race, this time finishing in 10:12.82, but only finishing in fourth place.

Both finishes were done with times that any runner could be proud of, but, I know, and I think local fans know, Ketchum has a little bit left in the tank in his track and field finale this weekend at the Memorial Stadium in Great Falls.

During Ketchum's final meet, he will compete in the 400, 800, 1,600 and the 3,200 for the Bears. He can easily be considered a favorite to place in all four races, but I think it is also safe to say he might just be the favorite to win either the 1,600 or 3,200, or even possibly both. Chances are he will need to shave some precious seconds off his best times to do so, but Ketchum is that talented of a player to get the job done.

This weekend means the final opportunity for Ketchum. He has just four events and just 15 laps around the track to get the job done, so the time to bring home the gold is now. Countless athletes before him have gone onto claim their state titles, and now hopefully it is his turn.