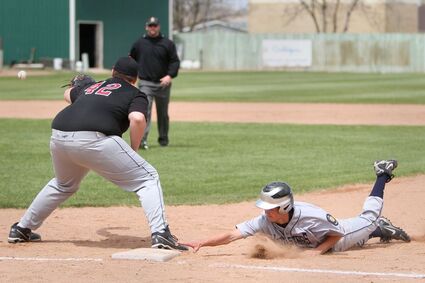 Havre's Travis Roth dives back to first base during a recent American Legion baseball game in Havre. After a short break, the North Stars are back at home to host the Medicine Hat Knights in a Northern District doubleheader Sunday at Legion Field.

After a short stretch of no games for the Havre American Legion baseball program, the North Stars are once again preparing to continue on with the 2014 schedule.

A week ago the North Stars split a home doubleheader with the Glasgow Reds, bringing their overall record to 2-4. But the competition isn't going to get any easier, as the North Stars now await a home doubleheader with the Medicine Hat Knights from north of the border. Sunday's games will be played at Legion Field in Havre, with game one starting at 1 p.m., and game two starting roughly at 3 p.m.

Havre has already shown good improvement from the beginning of the season, and the squad is hoping to avoid what happened last season in the North Stars and Knights first meeting. Last season in early May the Knights defeated Havre 16-2 and 11-0, both games ending just after five inning of action. The Pitching from the North Stars has been strong at times early, and that will be key against the bats of the Knights. Tyrell Pierce, Chris Vukasin and Dylan Carpenter have handled most of the load on the mound so far, and the three do combine for some power and accuracy. And facing talented bats like Kyle Florkowski, Riley McDonnell, Cam Geiger and Evan Welford, power and accuracy will be important.

On the flipside, the North Stars at bats have also shown some promise, but facing a deep and talented roster of pitchers, runs might not be too easy to come by in either game.

Kade Krauss, Jonathon Stark, Nate Star, and Florkowski have all seen actin on the mound this season, and Jonathon Stark has already recorded a shutout victory, while Nate Stark had a four inning outing he sat down nine batters with strikeouts. The Knights have lost to teams like Lethbridge and Strathmore, but has defeated teams like Fort Macleod, and split with teams like Vauxhall. Runs might be hard to come by, and if they are, it might be a long afternoon for Havre. Travis Roth, David Denny, Pierce, Spencer Ross and Chance Pitkanen have helped lead the offensive efforts early and should play key roles for the North Stars Sunday, win or lose.

The Havre North Stars will host the Medicine Hat Knights Sunday at 1 p.m. and 3 p.m. at Legion Field in Havre. The two seven-inning games will start a busy stretch for the North Stars, who also host the Great Falls Volts Tuesday night, and the Havre Jamboree next weekend.