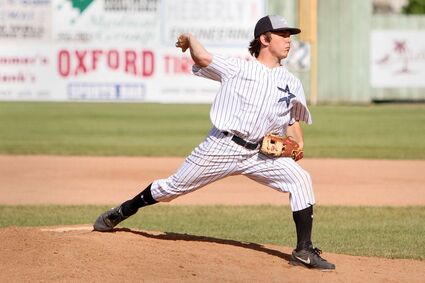 Havre's Ryne Antley fires a pitch during the North Stars' win over the Glasgow Reds (B) Sunday afternoon at Legion Field. The win came in the final game of the Havre Jamboree, which ran Friday-Sunday.

With another Havre Jamboree in the books, the Havre North Stars American Legion baseball team got the opportunity to play four more home games over the weekend.

There were 18 total games played at Legion field over the three days, and the North Stars were in on four of those games. And it was a solid weekend of competition, as they went 2-2 in the non-league matchups. Friday, the Twins defeated the North Stars 8-3 in seven innings. And Saturday, the North Stars suffered another loss at the hands of the Giants, 6-0 in six innings, but bounced back to defeat the Prospects 5-1 late Saturday night. Havre closed out the weekend tournament with one afternoon game Sunday. This time, the North Stars defeated the Reds’ B squad 12-2, the second win over the Reds B squad in two weeks.

With all four games coming from the non-league portion of the schedule, the North Stars were able to utilize the entire roster. And whether it was getting kids playing time in the field or on the mound, or getting them those always important at bats, the North Stars got ample opportunities and innings to get better. But according to head coach Danny Wirtzberger, the North Stars got to do a little showing off as well.

“The number one goal was to show off our community, show off our field, and show off our facility,” Wirtzberger said. “All of our players did a fantastic job making sure our field was ready for each game, and making every game feel like a big league game. Every team here had a good time.”

But on the field, the North Stars had some goals as well, and on the mound, Jeff Miller and Ryne Antley showed they could handle some of the load moving forward. Miller made his season debut on the mound in the 8-3 loss to the Twins, while Antley pitched in his season debut Sunday evening in the 12-2 win over the Reds.

“When we were on the field we needed to find another pitcher and a half, but lucky for us we found two,” Wirtzberger said. “Jeff Miller pitched fantastic, and Ryne Antley did a standup job for us today (Sunday). They threw strikes and that is what we need our pitchers to do, that is what we have to do if we want to compete. We don’t want to be that team that thinks we only have a chance with Tyrell (Pierce) on the mound, we want to be that team that has a chance every time we play. With the pitchers we have, it looks like we will have that chance.”

After losses in their first two games of the weekend, the North Stars finished with two wins because the bats came around.

“We really got rolling with the sticks in our last two games,” Wirtzberger said. “We were compacting hits on top of each other, and we really closed out with two strong performances. Consistency would be a good thing for us, but we are just going to keep working, we still have things to work on that I can see, and we will be working hard before we get deep into our district schedule.”

In the two losses, the North Stars combined for just three runs, including no runs in the loss to the Giants. But Havre was close to a third win on the weekend when they led the Twins 3-1 through five innings. Things turned for the worse in the top of the sixth when Glacier rallied for three hits and three runs and took a 4-2 lead over the North Stars. Glacier added four more runs in the seventh to ensure the win over Havre.

It is another short turnaround for the North Stars, as they get right back into action this week. Tonight, the North Stars will face Glasgow in an doubleheader on the road, and Thursday the North stars will return home for face Tri-County at 5 p.m. at Legion Field for a district doubleheader. 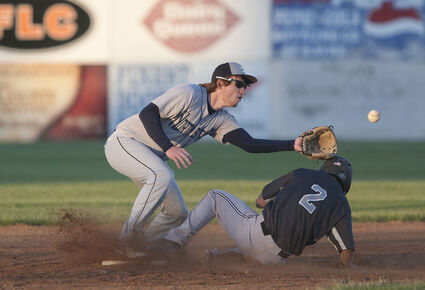 Havre's Chris Vukasin, left, tries to make a play at second base during the North Star's Havre Jamboree game against Glacier Friday night.