Robertson more than holds her own 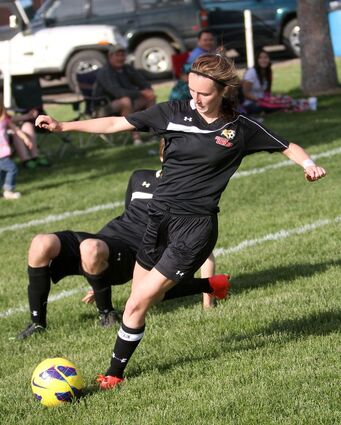 Hi-Line United's Kiana Robertson strikes a ball during a U19 soccer match against Sidney last Saturday in Havre. Robertson has been playing club soccer for years, but she's spent the last three seasons playing with the boys on the United U19 co-ed team. This season, Robertson, who just graduated from Havre High with honors, is a starting forward and a captain.

Kiana Robertson has been playing club soccer for the last six years, the first three on a U16 Hi-Line United all girls program, and the last three years on the Hi-Line United U19 program in Havre. Robertson is currently a midfielder for the United, and is one of just four girls on the roster. Her first two years playing with the U19 squad, she was the only girl. Robertson is has also been a captain for the last two seasons and is a starter for the United.

But she isn’t just a club soccer player.

Robertson is also a standout student, a future college attendee, and a former cross country runner and wrestling manager for the Havre High Blue Ponies. She graduated this spring from Havre High, but took care of the HHS wrestlers for three years and ran cross country for three as well. But her academic accomplishments weren’t overshadowed as Robertson was an honor roll student and the Havre High Student Body President. Her accomplishments in and out of the classroom have all led up to her acceptance to George Washington University in Washington, D.C., where she will major in sociology and minor in gender studies.

In 2011 and 2012 the United won back-to-back state titles, and Robertson was on the 2012 roster for that impressive feat. But in what might be her final season with the United, Robertson, as well as the rest of the roster, are in the hunt for a title in 2014. The state tournament will be played in Billings this weekend, and the United are in a good position to make some noise.

The Havre Daily News caught up with Robertson and asked her five questions prior to the United’s trip to Billings for the Montana State Cup this weekend.

HDN: Why do you choose to play with the Hi-Line United co-ed team instead of the girls United team?

Robertson: “When I moved back to Havre I didn’t have that many friends that were girls, but most of the guys that were already on the team were my friends and they told me I should just play on their team. They told me that they were more advanced, but I wanted to challenge myself and become a better player. Overall I think it has made me a way better player and a better person because of all the challenges. The first two years I was the only girl on the team, but this year we have three new girls, which was awesome, but going from all girls to coed, it was completely different. The all girls team I played on in Belgrade took soccer seriously, but the boys team, the level of dedication is way different and there is no drama.”

HDN: How have you seen soccer grow in Havre as well as all over Montana over the years?

Robertson: “Soccer has come a long way, but I feel like it still has a long way to go because nobody really appreciates it yet. Havre has some fans that support club soccer, and there are a lot of businesses that have helped us out, but not everybody appreciates what we do. We have kids come from Chinook and all the way from Harlem every day to play on this team and that shows a lot of what soccer has done and how it has grown.”

HDN: With all of the traveling during the season, how does the team stay busy when it’s not on the field for games?

HDN: Is this team capable of a state title this season?

HDN: What goals have you set for yourself, or do you still have for yourself on the soccer field?

Robertson: “Switching from a girls team to a guy’s team, like I said, is different. My body size compared to those guys, I have always had an issue of being scared and being scared to put my body on the line. I have come a long way in being more aggressive, but I still have a long way to go. I need to focus on not being scared, being aggressive and being louder on the field. I feel like I am loud when I am playing, but I guess nobody can ever hear me so I have to work on that.”