United chase a championship in Billings 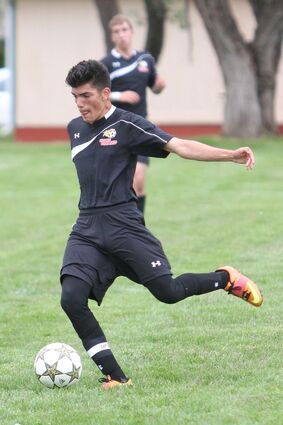 Hi-Line United's Angelo Flores boots a ball during a U19 soccer match last Saturday in Havre. Hi-Line United teams are playing in the Montana State Cup Friday-Sunday in Billings.

Once June rolls around, every soccer club across the state has one thing on its mind, a state championship.

Friday through Sunday, the Hi-Line United U19 co-ed soccer team will play for the Montana State Cup in Billings. Joining the United in the Classic title hunt will be the Big Timber Wolves, Laurel Storm, Red Lodge Soccer, Sidney Strikers and Miles City Posse.

The United will face the Wolves at 11 a.m. Friday, followed by the Storm at 5 p.m. Friday evening. How the United do in their bracket determines who and when they play Saturday and Sunday. Later opponents will either be Red Lodge, the Strikers, or Posse.

And the United aren’t heading into the state tournament weekend on a winning streak, but they are heading in after two much-needed games. Last weekend in Havre the Wolves defeated the United 2-1 and the Strikers defeated the United 5-1. But those two home losses came after the United lost several key players from the roster due to injury in prior games. They weren’t 100 percent at the end of the season, but after some time on the pitch to get used to the new conditions and lineup, the United are confident moving forward, even without the likes of Karina Partido and Troy Mord.

“Last weekend was our first weekend adjusting to another loss of key players,” Hi-Line head coach Briayan Flores said. “It was a weekend of changes and figuring out how we can adjust successfully. The matches at home were preparation and a perfect time to see the players attempt new roles. The matches were eye-opening experiences not only for the coaches, but also for the players. Our whole season has been about adjusting, but this weekend we will see major changes in our strategy as well as our formation. This past weekend sparked ideas and solutions to our unfortunate losses and the kids have worked and studied hard this short week before state to analyze and understand the changes.”

The United struggled to find the back of the net in their final weekend of regular season action, but did show signs of coming together at the right time. When the United got out in transition, Trey Scofield, Mitch Woods, Elijah David, Kiana Robertson, Angelo Flores, and Matt Hodgson all showed they were capable of making the right runs and the right reads. Next, the United just have to turn those runs and reads into goals, especially against a field of teams that have high powered offensive production. Defensively, that means the United have to be a tight unit as well. Goalie Spencer Obressley will be very busy over the weekend, as will defenders like Desmond Fialkosky and center back Sean Dugdale, if Dugdale is ready to play after a head injury last weekend.

“This tournament is the most important weekend for the U19 players,” Coach Flores said. “The best part of the tournament is that any team is capable of taking it. The season is just preparation for this weekend, and past tournaments have seen the favorites lose out in the first round as well as the team with little chance win it all. Last year, we came in third place during our rebuilding process. We shocked many with our play and it's only because of the intensity and distinct atmosphere that is felt at state.”

There may be no clear-cut favorites this year at the state tournament, but that doesn’t mean it will be an easy title either. The United will have to play their best soccer, offensively and defensively if they hope to win their first title since their back-to-back titles in 2011 and 2012. Last year’s third place finish only left the United more hungry, and that is clear in just how much work and effort they have put in on the pitch over the last several months.

“The work these United players put into the sport makes it more than just a game to them. For the past seven months, these players not only practice for hours on a daily basis, they become united by spending even most of their free time together,” Flores said. “The passion for the sport brings them together and the unity that they desire connects them. To them, this is more than just a game with their teammates, this unit is family and that is what will aid their journey at state. They play with heart and conviction on the field.”

The United will face the Wolves at 11 a.m., followed by the Storm at 5 p.m., Friday in Billings. The United U16 team will also play in Billings this weekend.