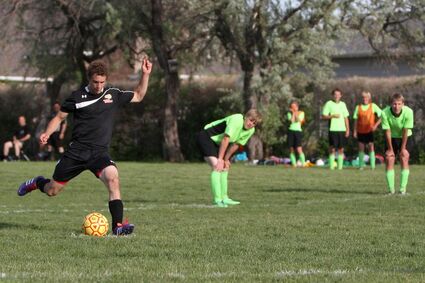 Elijah David and the Hi-Line United U19 soccer team finished in fourth place at this past weekend's Montana State Soccer Cup in Billings.

The goal heading into the weekend was a state championship, and after a third-place finish a year ago, the Hi-Line United U19 soccer club knew that was a plausible goal for 2014.

But while the United did a lot of growing up since last year's rebuilding stages, so did the competition. The Montana State Cup in Billings proved to be very competitive this year, and the United saw that in their three matches on the pitch, and eventual fourth-place finish.

"It was truly a tough tournament," Hi-Line head coach Briayan Flores said. "We suffered even more losses with a few players under the weather, on top of the few we were already missing, but the kids fought hard with the limitations, but fell short."

Sick players and playing without Karina Partido and Troy Mord made it tough on the United.

Friday the team played two matches, going 1-0-1 and finishing as the No. 2 seed in their bracket (A). The Big Timber Wolves defeated the United 2-0, but the United followed with a 0-0 tie with the Laurel Storm. While the Hi-Line squad didn't record a win Friday, neither did Laurel, and the final seeding was settled by a tiebreaker. The United allowed two goals in two games, while the Storm allowed four, giving the United the No. 2 seed and a spot in the semifinals Saturday.

"The tournament was so tight that each match was determined by very close scores," Flores said. "Our defense played incredible and held both teams to only two goals for the day. Sean Dugdale (goalie), Brandon Robertson, Derek Van Dessel, and Desmond Fialkosky did an outstanding job of holding the very strong attacks of the other teams."

Red Lodge started the weekend hot Friday, and that streak continued into the semis, as the No. 1 Red Lodge Soccer program from Bracket B defeated the United 5-0.

While the United defense was strong in the two matches prior, they struggled to stop the hot Red Lodge offense. Red Lodge went 2-0-0 Friday and scored a total of six goals. They allowed just two. Saturday, the success continued with five more goals against the United.

"In the semifinals today (Saturday), we went up against Red Lodge and lost, which meant we would not advance to the title match," Flores said. "The team fought hard all tournament, but we fell short of the championship match by one game. The team played and gave everything they had throughout the match and worked every second of each match. We are all extremely proud of our players as, they showed true heart and determination this tournament."

The United fought through their share of ups and downs this season, but never let up or stopped fighting. They were determined to bring a state title back to Havre, but came up short, and not due to lack of effort. Their season was capped off with a 1-1-1 showing against a tough field of state competitors, and local fans can be sure that the United will be working for a state title next year.