It's been a great ride in Havre and with the HDN 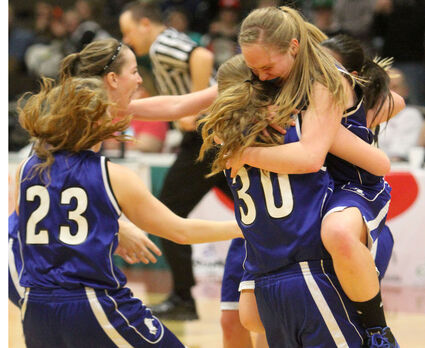 The Havre High girls basketball team celebrates winning the 2014 Class A state basketball championship last March in Great Falls. The state championship was one of many sporting events that Daniel Horton captured for the Havre Daily News in his five-plus years with the paper. Horton is leaving Havre to return to his native Washington.

For nearly six years I have called Havre home. I have family here, I have met a lot of great people here, I spent the first couple years of my marriage here, my wife finished her teaching degree at Montana State University-Northern, and the Havre Daily News gave me a shot fresh out of college when other newspapers were busy with layoffs and downsizing. It truly was time well spent, and I am thankful to have had the opportunity to work and live here.

I am excited for what lies ahead, but it is also tough to leave a small, tight-knit community like Havre, especially after being welcomed and accepted like I was.

I know I won’t miss my first apartment, a studio that barely fit my bed. And I can think of a couple coaches, coaches that will remain nameless, that could probably use a break from seeing my name show up on their caller ID several times a week for months at a time. But overall my time here was great, I enjoyed covering numerous state championships from the local high school programs, and if anybody qualifies as an honorary Blue Pony, I think I meet the mark.

But the opportunities I got to cover of Lights and Skylights athletics were also priceless. And while not every season was a winning season for some of the MSU-N programs, they were always well represented by class-act athletes and coaches that made my job fun and exciting.

Coaches, athletes, and the community made covering and shooting sports easy. If the hardest part of my job were late nights and long hours in an uncomfortable bleacher seat, then I would say I was doing all right.

I know I have mentioned how great my time here has been, but I need to make sure I thank everybody involved as well.

Obviously the Havre Daily News gets a big thank-you for their part, but more specifically, so does my boss and friend George Ferguson. Your sports editor puts in more time than most are aware of, and I know his dedication to local sports and athletes is unmatched. He took a chance on me for a writing position when I had just graduated with a degree in visual journalism, and somehow turned my love of sports into a printable and readable format. Believe me, it was a long and strenuous learning process in the early stages, but I truly am thankful for the opportunity I was given. My photography skills have grown immensely, and I now have a one-two punch with my writing skills moving forward.

Again, it is also important for me to thank all the coaches, as well as all the athletes that I’ve had the honor to cover. I got to watch a lot HHS wrestling success, as well as cherish the opportunity I was given to watch the 2014 Blue Pony girls basketball team from their very first game as freshmen, to their final game as seniors when they hoisted the Class A state championship trophy.

Those are the types of moments I will always remember as I see where else the future leads me. My wife and I are headed back to Washington, but the community of Havre will be missed.

Good luck Dan in Washington! You did a fantastic job with the HDN, I really enjoyed reading your sports coverage. Good luck again. Go Ponies!