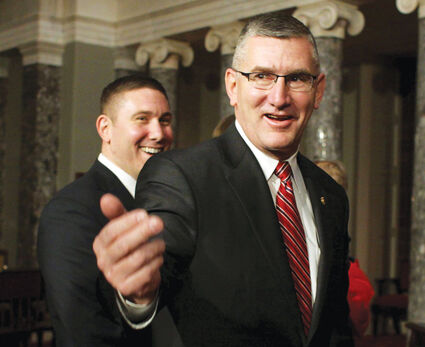 HELENA - The Department of Defense has taken the unusual step of overseeing a plagiarism investigation being conducted by the U.S. Army War College against Sen. John Walsh because the Montana Democrat is a member of Congress, the college's provost said Tuesday.

The department will review the recommendations of the school's academic review board, Provost Lance Betros said.

Army Col. Steve Warren, a Pentagon spokesman, said Tuesday the decision on whether punishment is warranted against Walsh will be made by Maj. Gen. William Rapp, the commandant of the U.S. Army War College.

Betros said it was his understanding that the decision on punishment would be made by the Pentagon, and he said he has no knowledge that the sanctions would be decided by Rapp.

The reason for the discrepancy in Warren and Betros' comments was not immediately clear.

Normally, the decision is reserved for the school's deputy commandant. It is rare for the Defense Department to intervene in a student misconduct case, but it does so in investigations of general officers and federal lawmakers, Betros said. "Because this is a member of Congress who is a military veteran, we have been given instructions from DOD that they have jurisdiction in this case," he said.

It may be a bit uncommon, but it's not unprecedented for the military services to ask the inspector general to take a look at an investigation to get a second view and make sure that all legal procedures were followed, he said.

The college referred the case to its five-member academic review board after a New York Times story last week showed Walsh used others' work without attribution in a 2007 research paper required for a master's degree.

"From there, I don't know who will make the decision," he said.

Walsh campaign spokeswoman Lauren Passalacqua did not have an immediate comment.

Walsh has until Aug. 15 to turn in any material in his defense, and he may request to appear before the board, Betros said. If he does, the appearance will be closed to the public. If not, four members of the five-member review board will conduct their work without a hearing.

"I'm very confident within a week we'll have this wrapped up," Betros said. "It should not take long."

It's also unclear how quickly that decision will be made after the review board turns over its findings.

The war college's normal sanction for plagiarism is the rescinding of the former student's degree and his name grinded from a plaque of the graduating class at the college, Betros said. That has been done six times since 1990.

Lesser disciplinary actions, such as verbal counseling, are also an option, but stripping the degree is typical in plagiarism cases, he said.

The college also will conduct a review of its procedures and internal controls in the wake of the Walsh allegations. Betros said he is comfortable with the plagiarism safeguards in place, which includes training faculty to look for triggers such as work that is above a student's normal abilities or poorly transitioned paragraphs.

The school does not run each student's paper through an online plagiarism checker. That practice would foster an environment of mistrust among a student body of high-level military officers and senior civilians, Betros said.

"These are highly capable and competent people," he said. "We assume they are people of high honor."

Walsh is running to keep the Senate seat he was appointed to in February when Max Baucus resigned to become ambassador to China. The former Montana adjutant general and lieutenant governor is running against Republican Rep. Steve Daines.

Walsh has called the extensive, unattributed use of scholars' work in his paper an unintentional mistake. He said he was experiencing symptoms of post-traumatic stress disorder at the time that included nightmares, anxiety and sleeplessness.

Walsh later said he was not blaming PTSD for the mistake.

AP writer Lolita Baldor contributed to this report from Washington.