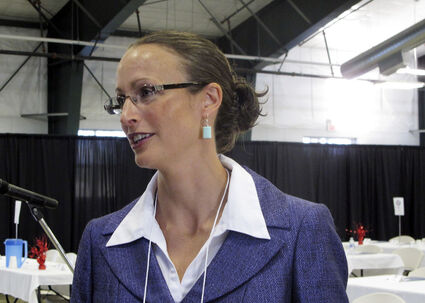 HELENA (AP) - Montana Democrats selected a little-known state legislator named Amanda Curtis as their candidate for the U.S. Senate race after Sen. John Walsh dropped out amid plagiarism allegations from his time at the U.S. Army War College.

Curtis, a first-term representative from Butte, now faces the challenge of introducing herself to Montana voters and making her case for them to choose her over well-funded Republican Rep. Steve Daines with less than three months until the Nov. 4 elections.

"If we win here in Montana, outspent and outgunned in a race where we were left for dead, it will send a message to Washington, D.C., that we want change," she said in a speech before the vote.

Curtis, 34, is a high school math teacher who touts her family's labor ties in the blue-collar town of Butte. She emerged as the front-runner earlier in the week after receiving the endorsement of Montana's teachers union and when other high-profile party leaders said they weren't interested in the job.

She won her state House seat in 2012 and has participated in one legislative session. During that time, she came out in support of "reasonable" gun control legislation that would expand background checks, a tough sell in a pro-gun state such as Montana. She also criticized a 2011 medical marijuana law passed by the state Legislature as overly restrictive, and unsuccessfully pushed to increase the percentage of Montanans hired for state public-works projects.

The vote was 82 to 46 for Curtis. There were 129 delegates from across the state who attended the convention, but not all voted, said Democratic Party spokesman Bryan Watt.

The convention is the first of its kind for Montana Democrats, Watt said.

The Senate race was seen as a tough one for Democrats to win even with Walsh in the running. Now Daines is expected to have a bigger advantage going up against a newcomer who doesn't have his name recognition or his $1.7 million campaign bank account.

Republicans need a net gain of six seats in November to take Senate control, and Montana is a prime targets to pick up a seat that's been in Democratic hands for more than a century.

But delegates arriving at the Lewis and Clark County Fairgrounds insisted the race is still winnable.

"I think we need to keep this seat, period," said Judith Forseth, a delegate from southwestern Montana's Park County. "I'm not ready to concede."

Republicans need a net gain of six seats in November to take Senate control, and Montana is a prime target to pick up a seat that's been in Democratic hands for more than a century. Democratic delegates said they wanted to choose a candidate who would energize the voter base and ensure that Daines isn't elected.

"This is a watershed moment to make sure that doesn't happen," Ravalli County delegate Lee Tickell said.

Montana Gov. Steve Bullock appointed Walsh, who was Bullock's lieutenant governor, in February when Max Baucus resigned the Senate after 35 years to become ambassador to China.

That gave Walsh the incumbency and a boost in fundraising, but his candidacy faltered when The New York Times published a story in July that showed Walsh used other scholars' work extensively in a research paper written in 2007.

Walsh said he made an unintentional mistake that he partly blamed on symptoms of post-traumatic stress disorder. He withdrew his candidacy last week when the criticism would not die down.

Walsh said the allegations were a distraction and that he would focus on serving the rest of his Senate term.

The U.S. Army War College began an investigation into the plagiarism allegations on Friday.

Walsh was a colonel in the Montana National Guard when he was studying for a master's degree at the college. He capped his 33-year military career as Montana's adjutant general before resigning to become Bullock's running mate in 2012.

The convention's delegates gave Walsh a standing ovation before the results of the vote were announced.

Promises change, backed by the teacher's union, and a proponent of gun control? These are the things doing the most good for our nation right now. No doubt.