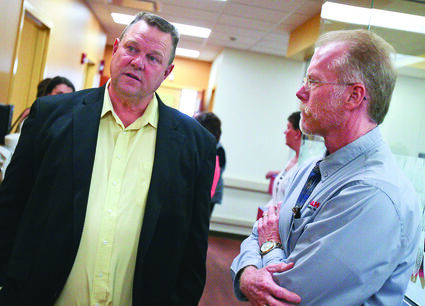 Sen. Jon Tester, left, takes a guided tour from Nurse Practitioner Gene Powers during a series of tours at the grand opening of the new Bullhook Commuinty Health Center.

Rain drove the event inside Friday but didn't dampen the spirits of well more-than 100 people gathered to celebrate the opening of Havre's newest medical facility.

The grand opening of Bullhook Community Medical Center, on the 500 Block of 4th Street across from Havre City Hall, started at 9:30 a.m. and ran through the afternoon with a barbecue and tours of the state-of-the-art facility.

"Wow. We did it," Bullhook CEO Cindy Smith said during her remarks.

Part of the celebration was dedications of walls and facilities, including the Jon Tester meeting and training room and the dedication of a wall to longtime Bullhook supporter Tillie Patterson.

Bullhook board member Angela Twombly, in a tearful dedication, announced the Essie Rose St. Dennis Memorial Wall. Twombly said St. Dennis was one of the first board members at Bullhook and fought for the success of the facility, including numerous trips to Washington where she earned the respect - and affection - of federal lawmakers and officials.

The board also presented a plaque to Smith, with several people saying that without her work, the new clinic never would have existed.

The new $7.3 million clinic was built after the U.S. Department of Health and Human Services Health Resources and Services Administration awarded Bullhook a $4.95 million grant through the Affordable Care Act. Bullhook leveraged that into the total using other sources including New Market Tax Credits and loans.

In his remarks, Tuss said Bear Paw Development played a small role in funding, providing a brownfields abatement loan to remove asbestos from the buildings torn down to build the new building, adding that that funding shows how a small investment can make a big difference.

"This project could be considered the poster child for the brownfields program," he said. "Taking an under-utilized property that's development is hampered by concerns over environmental problems, and turning it into a valuable community asset. ...

"This is a gorgeous new building. What's more beautiful, however, is the work that will occur inside the walls of this facility," Tuss said. "For decades to come, individuals and families in northern Montana will be able to receive quality health care at this location because of the vision of the folks at Bullhook, the commitment of the federal government and the support of the community."

Tuss said that $7.3 million projects don't happen every day - in fact they rarely happen in rural Montana at all. They only happen in communities where people are prepared and forward-thinking.

"Havre is clearly one of those places," he said.

In his remarks, Tester said he used to drive down 5th Avenue and see the yellow construction material walls as the building was erected by Guy Tobacco Construction and wondered if it ever would come together.

"It was 13 months ago we stood right on that corner and broke ground," Tester said. "From dirt to dry wall, we have seen this facility grow, and the transformation has been incredible. ... Then I drove up today and said, 'Wow, what a jewel for this community. ...

"With this brand new medical, dental and behavioral health facilty folks in Havre and along the Hi-Line are going to have accessible, affordable care regardless of their ability to pay, and we all know that no one should go without health care because of their zip code or income," he said.

Tester said that was one of the goals of passing the Affordable Care Act, saying the bill was not perfect and more needs to be done, including Montana passing the Medicaid expansion that would provide coverage for 70,000 more people.

He said he is committed to helping the people who made Bullhook a reality in continuing their mission.

"Just over a year ago this was an empty lot. Havre didn't have a state-of-the-art facility," Tester said. "Now, 13 months later, Havre has it."

Smith read a list of requirements the new facility must follow, including having a sliding fee scale based on patient's income and using a patient-centered program.

"And that means the patient has a voice in what they need and what the patient thinks they can do to try to reach their goals," Smith said.

She said the center will continue to work to increase services, including with its work to add a pharmacy, increase mental health services including providing an addiction counselor full-time at Havre High School, and continuing to adapt to fill needs in the community.

"We have come a long ways since we started with a part-time care medical provider in the (Hill County) Health Department way back in 2005," Smith said. "There have been many who made this possible ... and we hope to keep this building, this strong infrastructure, and continue to bring hope and knowledge and make our community a healthier place to live and grow."