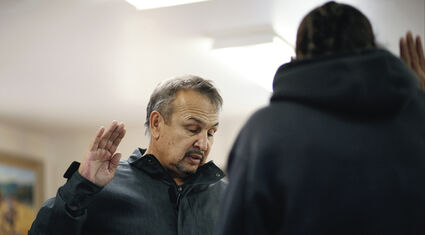 "It's time for us to start doing what's right" St. Marks said to the small crowd gathered in the tribal chambers. "We've been in turmoil now for two years. It's time for us to heal and start putting things back together where they belong. I think the only way we're going to do that is with our new council and you guys."

The only council member present was Dustin Whitford. St. Marks spoke to him publicly after the swearing in.

"This tribe is in disarray right now - it's all messed up," St. Marks said.

Whitford emphasized that everyone should work together instead of blaming another.

"We have to communicate and cooperate," Whitford said. "No more 'me and you' or 'them against us.'"

Whitford said that polarization between the members of the council was one of the issues he had with St. Marks when he was active in the government.

"You took me into your office and said 'they're all against us,'" Whitford said. "I didn't agree with that."

"They were against us," St. Marks replied.

St. Marks was removed by the tribal council for misconduct, but St. Marks said the real reason was that he was cooperating with federal prosecutors on a corruption probe.

St. Marks then won an election to get this job back, but the election committee invalidated the results. The tribal court and an appeals court ruled that the election board was wrong.

After he was sworn in at the tribal chambers shortly after 3 p.m. Thursday, St. Marks attempted to get the four newly elected members of the Chippewa Cree Business Committee sworn in as well.

The four business committee members were elected, but Jonathan Windy Boy, who was running for a position on the committee but lost, filed an objection and later an injunction against the results of the election because an honorary tribal member voted. Windy Boy said the honorary member was not an enrolled tribal member and shouldn't have been allowed to vote.

St. Marks was refused his request because a hearing on the issue is being scheduled for Dec. 16.

"That fight is between the election board and Jonathon," St. Marks said in the chamber.

St. Marks said that the appeal should not stop the new committee members from being sworn in because it only involved one vote.

St. Marks replied with his desire to get the old councilmen out of office and getting the new members in to move ahead with the governing of the people of Rocky Boy.

Whitford spoke to the people sitting in the chamber and said to put his words on record.

The two men shook hands after their debate and, afterward, St. Marks said he would start work as soon as he could. Almost half of his term has passed as he has waited to be sworn in to the position, but he said he was glad he finally was able to get to work.

This new chairmen and new council needs to let the guardians project and FBI come in and go thru all Tribal finance and all departments finances and they'll find all the corruption that's been going on on this reservation for years. If were going to start a new beginning, this where it all should start.