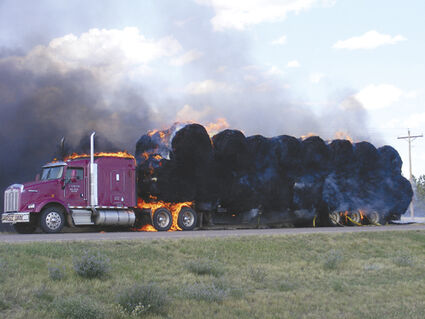 Fire engulfs a semitractor-trailer and the load of hay it was hauling shortly after 4 p.m. Monday west of Havre on U.S. Highway 2.

A semitractor-trailer had to cut its haul short after the hay bales it was carrying were ignited.

Havre Fire Chief Tim Hedges said that after a preliminary investigation, they believe the fire was caused by the exhaust on the semi igniting the top of the bales.

Havre Fire Department trucks were dispatched about 4.5 miles west on U.S. Highway 2 at 4:19 p.m. and were there until 3:30 a.m. today making sure the fire was fully extinguished.

Firefighters doused the hay bales to stay the fire.

"We actually offloaded the bales to the side of the road and let them burn," Hedges said, adding...