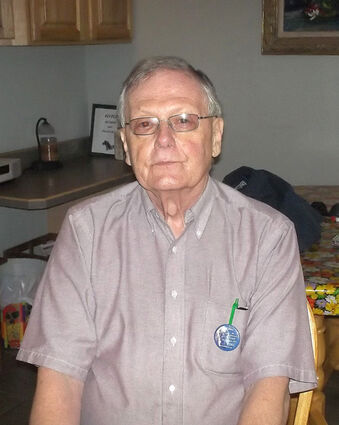 Local historian and author of five books, Gary A. Wilson, 74, passed away at Peace Hospice of Great Falls on Aug. 10 of multiple myeloma.

Gary was born in Everett, Washington, the only child of Beryl and Marjorie (Deffries) Wilson. He graduated from Everett High School, and earned a Bachelor of Science degree from Seattle University, attended Officers Candidate School, and much later attended classes at Montana State University-Northern. He worked at Boeing for a time, and then became a campus police officer at the University of Washington, where he experienced a campus riot.

Gary married Donna Reese in 1969, and they had two children, eventually moving to Havre, where he worked as a security guard at Northern. until his retirement. That was his "day job" while he developed his writing career. Donna and Gary divorced in 1990, but their friendship remained. When Donna remarried, her husband Hank Tweeten also became a friend to Gary and helped carry the family's burdens during Gary's illness.

Having always been fascinated with trains, Gary began studying the beginnings of the railroad in Havre. The employees at the Hill County Library helped him with research so often that they became like family. The more he learned, the more it ignited his thirst to dig deeper, and he came across so many stories about local pioneers and characters all over the state, and saw so many structures that begged to be preserved, that he began writing magazine and newspaper articles about them. Some of those stories grew into books.

It became his passion to preserve what was left of Fort Assinniboine, and he worked tirelessly to get grants and funding and accumulated a well-used set of painting clothing. (Although his family wonders how he managed to do what he did without the use of duct tape, his tool of choice!) He could visualize what the fort once was, and conducted tours with great dedication over the years.

While taking classes at Northern, Professor Harrison Lane became a friend and mentor who helped him greatly. Gary attempted to get identifying signs placed at locations like the small cemetery by the fairgrounds, was instrumental in organizing the Old Forts Trail, was active with the Clack Museum, and if it had anything to do with local history, he was probably involved. He loved this town.

Gary was grateful for the friends he made at First Lutheran Church, where he attended board meetings and ushered for many early services.

Cremation has taken place, and memorial services will be held at First Lutheran Church at 11 a.m. on Wednesday, Aug. 19, 2015, with Pastor Linda Rose officiating.

Gary's family has requested that memorials be made in his name to the Fort Assinniboine Preservation Association, First Lutheran Church, or to the charity of the donor's choice.

Please visit Gary's online memorial page and leave a message of condolence for his family at http://www.hollandbonine.com.