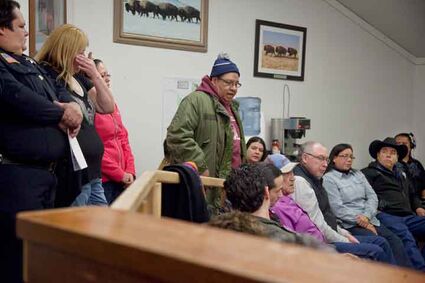 Erica Dion, from left, and Deputy Hill County Attorney Caroline Gray listen to state District Judge Dan Boucher during a hearing on a petition to revoke Dion's release on bond due to violating conditions of her release. Boucher denied Dion's request to be released on her own recognizance after she admitted violating the requirement she be law abiding.

After hours of emotional testimony from law enforcement officials and people on and off the reservation, the Fort Belknap Indian Community Council voted unanimously Monday to declare a state of emergency against methamphetamine and other drugs on the reservation.

The vote was taken during a meeting attended by law enforcement officers, representatives from social service agencies from both the reservation and surrounding towns, and people from nearby communities.

The crowd at Monday's meeting was so large that the council's chamber was filled to capacity and some had to sit outside the...