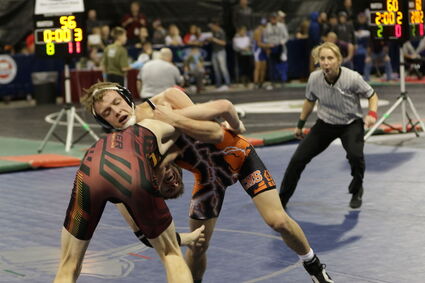 BILLINGS -- The first day of the 2016 All-Class state wrestling tournament was an emotional one for the Chinook Sugarbeeters, but it was also a day that the team and the rest of Beeter nation won't soon forget.

Less than a week after the passing of their cherished teammate and friend, Jesse Dannels, the Beeters took to the mats Friday inside the Rimrock Auto Arena at the Metra in Billings and what ensued was something special.

After honoring their fallen friend with a beautiful tribute in the parade of teams by wearing t-shirts that said "I love Jesse" the Beeters put on a show for the ages. All five of Chinook's wrestlers qualified for the second day of the meet and four of them: Tate Niederegger, Jake Norby, Kenny Pruttis and Kevin Young, each qualified for the semifinals. Derek Bell is also still alive after winning two of three matches.

And as far as the team competition is concerned, Chinook is well on its way to achieving its goal of winning a second consecutive state championship, leading second-place Hot Springs 45-17.

"I thank god for these kids everyday," Chinook head coach Perry Miller said. "They are amazing. The resilience that they have is incredible. We came out a little bit flat, but Tate and Jake and Kenny came through to the semis and Kevin pulled off a huge upset. Derek Bell lost an 8-9 decision in the first round, but he's battled back and he's one match out of the money now. I don't know if words can explain it -- I know how their hearts hurt and I know how they feel when they walk out there. Unfortunately, it seems like they are as sad when they win as they are when they have lost. So I guess it fortunate that they aren't losing."

While no one would have blamed the Beeters if they were off their game, in light of everything that has happened, the team was determined at the beginning of the tournament to win a state title for Dannels and after a strong first day, their goal is well within reach.

"It feels great," Jake Norby said of reaching the semifinals for the first time in his career. "This is what I have been working for and it's what Jesse would have wanted for me, so I tried my hardest to do my best for him."

In addition to carrying a picture of Dannels out during the parade and wearing the t-shirts that professed their love for him, Chinook also wore arms bands that bore his name, arm bands that were provided by Arlee, one of the Chinook's top rivals for the Class C wrestling title.

"It's great," Norby said. "It just shows that the whole wrestling community is one big family. Honestly, all the support and everything that everyone has done for Jesse has been amazing.

"It was tough," Norby added on waking out in the parade of teams without Dannels. "He was supposed to be there with us. He's a leader and he's my best friend. I would have liked to have seen him out there. But with the whole crowd cheering for Jesse, we have become better than what we are. And it's just great."

In all, Chinook was 10-1 on the day with seven of the 10 victories coming via pin. And even though the Beeters have the state title well within their grasp, don't expect them to let down or let up, especially when they know their friend and brother is still watching.

"I just know that Jesse is smiling that million-dollar smile right now," Miller said. "He loved those guys and they loved him back. And I know he is with us right now, I can feel him in my heart. I know he's out there with him and that he's very proud of what they are doing. We are just going to keep battling. They are battling for him right now and we are just going to keep doing it, because that's what's working."

Chinook will be back on the mats Saturday morning at 9:30 a.m.