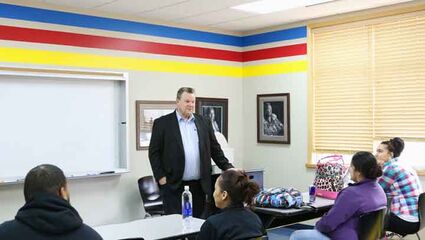 Efforts to strengthen the education system in Indian Country was one of the topics U.S. Sen. Jon Tester, D-Mont., discussed Tuesday during a visit to the Fort Belknap Indian Reservation.

Tester, who sits of the Senate Indian Affairs Committee and is a former school teacher in his hometown of Big Sandy, spoke with a 10-student American Indian Studies class at Aaniiih Nakoda College, a tribal college on the reservation.

Among those in the audience were five women who, along with being students, are assistant teachers at either the reservation's Head Start or early Head Start programs.