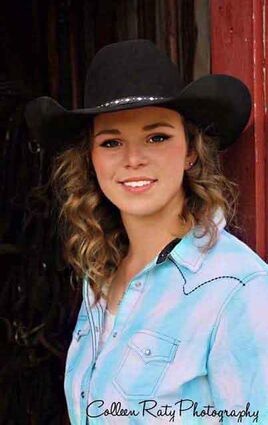 The four will be interviewed and exhibit their modeling and horse-riding talents at noon Wednesday at the Great Northern Fairgrounds' arena.

Sable  Swinney, 16, the daughter of Mike and Bobbi

Swinney. She is a high school senior and is involved in her community of Gildford by picking up garbage out of the ditches, cleaning the Gildford church, shoveling the snow and wrapping presents at the nursing home during Christmas. Swinney is very active in rodeo and has been ever since she can remember.

Emily Brurud, 17, is the daughter of Timothy and Susan Brurud.  She is a senior at Havre High School. She has been on the Governor and First

Hunger Council, a Junior Ambassador for the After-School Alliance and was part of the Havre High School Marching Band that went to Washington for the Fourth of July Parade. She is very active in her church youth organization and works with foster children.

Rachel Bartlett, 18, is the daughter of Robert and Lorraine Bartlett. She will be a freshman at Montana State University-Northern majoring in nursing. She was in the National Honor Society

and also is a member of the Havre High School Marching Band that went to Washington for the Fourth of July parade. She has received the Most Spirited Award  during the 2015-16 band year.

Kylie Mikuski, 16, is the daughter of Mic Mikuski. She is a junior at Havre High School and involved in 4-H, Girl Scouts of America,  was FFA president in 2015, and is in the Calipatria Chapter Cadet Program. She also volunteered  at an animal shelter and worked on

horse rescue at the Vet Clinic in El Centro, Ca. Kylie enjoys barrel racing, pole bending, goat tying, breakaway roping, soccer and softball. Her future goal is to rodeo through college, help kids in 4-H and raise/train/sell horses and become a veterinarian. Kylie would like to be Miss Great Northern Rodeo because she believes it will be a great experience and a challenge.

The winner will be announced at 6:30 p.m. Thursday, just before the professional rodeo.

Tana Johnson, director of the contest, said that 50 percent of the contestants' score will be based on the three judges' assessment of the candidate's horse-riding skills. This is important, she said, because the Miss Rodeo often represents the area at events where horse riding is necessary. Often, she said, the queen is expected to ride a horse she is unfamiliar with.

One-quarter of the score comes from the judges' assessment of their ability to answer questions during the interview portion of the contest. The other quarter is based on their modeling skills and personality. 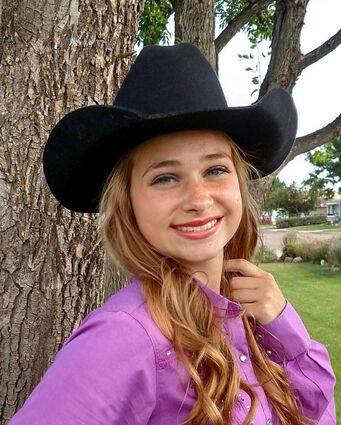 Judges will score each of the candidates during Wednesday's program. The results will be sealed and Johnson said even she will not know who the winner is until Thursday night.

The winner will get the crown and sash and a scholarship to Montana State University-Northern. She also has the opportunity to move forward in hopes of winning the Miss Rodeo Montana award.

For the first time this year, there will also be a Miss Teen and Little Miss Great Northern Rodeo Pageant.

The pageant will be held at 3:45 p.m. Wednesday at the Grandstand.

Registration will start at 3 p.m.

There is a $10 registration fee.

People just need to show up and register, she said.