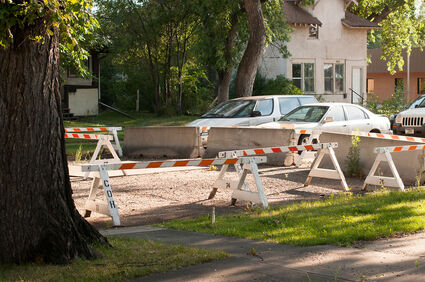 Cement blocks and sawhorses block off a covered hole on the 500 Block of 3rd Street where the street collapsed into Bullhook, a drainage that runs under much of Havre.

Work will begin soon on the reconstruction of the Bullhook stormwater system which runs through Havre, much of it covered by buildings and pavement.

The first step will be reconstruction of the 500 Block of 3rd Street where a large chunk of the street caved into the creek in October 2013. The street has been closed since then.

Mayor Tim Solomon said the entire project will hopefully be done this construction season, but it may not be completed until the spring.

The project will be partially paid for through a $500,000 grant from the Treasure State Endowment Program. The remainder will be paid for from city funds and a loan the city will obtain.

Streets were constructed over Bullhook in the early part of the 20th century. In several spots, it has shown its age, and the pavement has opened up to the drainage.

In addition to the 3rd Street work, Solomon said, the rest of the project will include work on:

City officials said more work needs to be done on Bullhook, but the need is not as urgent. In all likelihood, the city will have to undertake a second phase of the project.

Jeremiah Theys, a professional engineer with Great West Engineering, the project manager, said he checked out references on Kinkaid and found the company had good reviews from officials in Billings and Plevina, where the firm has done work.