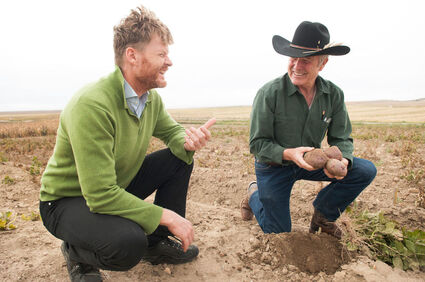 An Austrian political activist making speaking stops in the U.S. met with a Big Sandy organic farmer after he lectured at the University of Montana on the failures of capitalism.

Christian Felber, author of the book "Change Everything: Creating an Economy for the Common Good," says, when he discusses the issue, that the problem with capitalism is it makes money the ends and not the means.

Felber was staying with organic farmer and researcher Bob Quinn for the weekend at Quinn's home near Big Sandy.

The slogan of the Economy for the Common Good social movement is, "We strive for an ethical market economy designed to increase the quality of life for all."

Felber says there are more important things in life than money, among them, a healthy environment, healthy relationships, coherent community, well-working democracy, health, education and satisfaction of human needs.

Felber says the GDP, the gauge for how national success is measured, is proof that the current economic system is flawed. He said the GDP does not take into consideration whether a country is at war or at peace, if it's a democracy or dictatorship, the health of its people, the condition of its environment and the level of destruction on the natural environment.

As for democracy, Felber said it is not only safe in the confines of the ECG model, but it is better-fostered and better-ensured than the current system, in which democracy doesn't even exist anymore.

A moral economy is needed, one where corporations operate with a balanced goal of making money and, more importantly, to serve the common good of its people, Felber says.

Felber said capitalism has brought wealth and a quality of life common people had never seen until a few hundred years ago, but he wasn't quick to give capitalism too much credit.

"So capitalism had its positive side effects ... but it wasn't capitalism alone. It was always a mixture of a regulated market economy with some social and some ecological regulations," he said. "It was a co-effort of capitalistic market economy and state intervention."

The ECG is a truly liberal market economy, Felber said. It is defined by equal freedoms, equal rights and equal opportunities for everybody. It's an ethical market economy because it puts the the fundamental values of common good first, not money.

The ECG model has come up with a balance sheet companies can operate by to ensure the companies are ethical. The five categories measured in Felber's Common Good Economy are human dignity, social justice, ecological sustainability, cooperation and transparency.

He said several companies, mostly in Europe, have adopted the ECG model, several more are thinking about doing it, and so are American companies like INTUIT. Quinn said he first heard Felber at an iPhone meeting he attended in Istanbul about a year ago.

What impressed Quinn most about Felber's lecture, he said, was its emphasis on addressing the large concentration of money and power in the hands of extremely large international companies.

But unlike Felber, Quinn wasn't quick to disqualify capitalism.

"No, I'm not anti-capitalist. But I am anti-abuse of it. I think there's abuses now that are completely out of control," Quinn said. "Going in that direction, we're going to lose all the advantages that capitalism put together for us in the first place."

Quinn listed the large agrochemical company, Monsato, as a good example of how a large corporation uses its money to impede the will of the people.

"They were able to thwart the efforts of 90 percent of the people in this country who would like to have labeling on GMO product. ... They have put millions and millions of dollars into every state where an election has come up," he said.

Quinn said when the introduction of GMO alfalfa was being questioned by the Department of Agriculture, all it took was one call from the White House to put the product through without conditions.

That's the kind of power they have, he said.

Organic research is another example where outside influence has struck, Quinn says.

"We have less than a quarter of a percent in research from USDA for organic methods and production, yet the amount of sales for organic is five percent, the amount of organic farmers is over one now," Quinn said.

Organic demand is growing, Quinn said, "yet the chemical constituency and Monsanto cry 'we will feed the world,' which is a complete impossibility and falsification."

Quinn said he believes the organic ag business is like the car and conventional farming is the stagecoach. So, to him, it makes it all the more ridiculous that, even as demand is growing - "We can't keep up with the demand now" - disproportionate money is poured into what will one day be an antiquated practice, he said.

Quinn said he goes out of the country to do research, and what he's found further exemplifies why big companies can be so dangerous.

"We published 17 papers in Italy, now, trying to understand the difference between ancient and modern wheat, and we're starting to really understand a lot," he said. "And we know how we can go back to wheats that are healthy for people, just by measuring inflammation. We're seeing that the older wheats are anti-inflammatory and modern wheats cause inflammation," he said.

What's going on with the wheat is the result of excess herbicides meant to kill weeds that have become increasingly resistant, he said, adding that this should really concern Montanans.

"We have people with all kinds of sensitivities to wheat - that's our bread and butter, in this state - wheat is the staff of life," he said. "And yet 20 percent of the people in this country say they can't eat it anymore. What is going on?"

Quinn said Felber is proposing that the playing field be leveled, and the threatening influence of ag-chemical industrial complex is a perfect example of why he's right.

As daunting as the idea of legislating ethics seems, Quinn said, something can be done.

"So my biggest question is: How many people are left that want to do the right thing? The biggest problems we have now is with people who could care less about doing the right thing. They only want to enrich themselves at the expense of they don't care who," he said. "You can't really legislate morality, but you can throttle some out-of-control abuses through legislature."

In the end, Felber said, ethics come from the people.

"The sovereign citizens have the last word," he said.

After the interview, Quinn gave a tour of his organic operation in Big Sandy. For photos and a story about that, see Friday's Hi-Line Living.