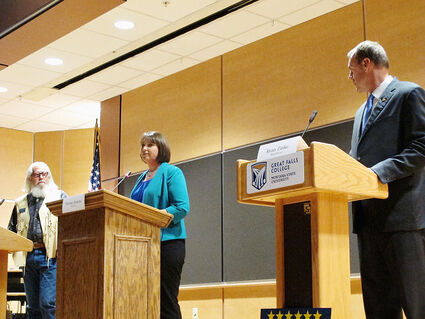 Democrat Denise Juneau, center, answers a question Oct. 5 as Libertarian Rick Breckenridge, left, and Republican U.S. Rep. Ryan Zinke look on during a congressional debate in Great Falls. Juneau and Breckenridge are challenging Zinke, who is seeking a second term.

BILLINGS - A decorated combat veteran warning about the threat of ISIS in America is being challenged for his U.S. House seat by a longtime educator who would become the first American Indian woman in Congress.