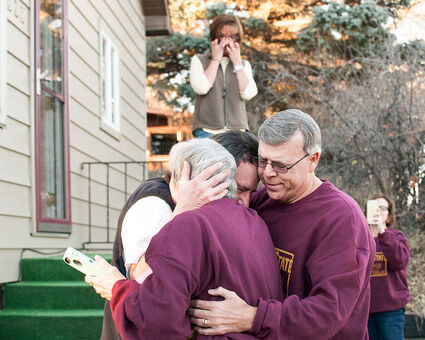 Mike Jennings, back, hugs his sister Sandy Erby and brother Jim Reimer Friday at Jennings' home in Havre. The three siblings, the last survivors of seven who were given up for adoption, met for the first time Friday.

A Havre man met two siblings for the first time Friday afternoon just in time for his, the eldest's, birthday.

Sandy Erby had flown in from Baltimore and Jim Reimer from Rancho Cucamango, California, to meet their half-brother. Jennings, 70, said he had plans to show them Havre - "which shouldn't take more than five minutes" - have dinner, and take them to the Bear Paw Mountains over the weekend.

Erby, Reimer and Jennings are originally from Indiana, where they were adopted or put into foster homes. Erby said the family had seven siblings, but the only ones still alive were the three on Jennings' couch Friday.

"I had foster parents ... and I was adopted when I was 7, " Reimer said. "I didn't know for sure that I had brothers and sisters. I was told I had a twin sister and possibly a brother by the administrators and my foster parents, and also my adopted parents."

The three siblings said they all had different fathers.

The reunion had taken time, diligence and an all-hands-on-deck approach.

"After I went through Indiana, a source, a woman that did the investigation of adoptions, she gave me records of birth certificates, death certificates and marriage licenses, everything. And that's how I got started doing it," Erby said.

Erby said her daughter called Reimer to tell him that he might be her uncle, but forgot to leave a callback number. The call, however incomplete, prompted Reimer's daughter to investigate via Facebook. Erby said the daughters, at some point, also hit Ancestry.com. 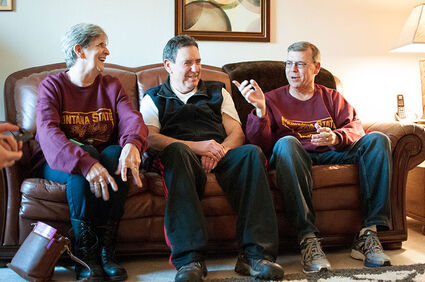 Sandy Erby and Mike Jennings listen to Jim Reimer speak Friday in Jennings' home. Jennings and his two siblings, all of whom were adopted, met for the first time Friday.

Erby and Reimer finally connected and began talking on the phone in October 2015. In March, Erby said, she flew with her grandson and daughter to California to meet Reimer and his family over Easter.

During that visit, Reimer said, they discussed their other siblings.

"When Sandy (Erby) was visiting with her grandson, we thought Mike (Jennings) had passed. So we thought it ended there, which is Sandy and I," Reimer said.

Once again, one of the daughters did some digging and found out Jennings was alive.

"We got back Easter Sunday and found out Mike (Jennings) was here in Montana," Erby said. "We found him the Thursday we got back and had a three-way call. So we've been talking once or twice a month since March."

Erby said the plan had been to unite next summer in Indiana, where they're all originally from. But then someone came up with a better idea.

"We wanted to surprise him on his birthday," Erby said.