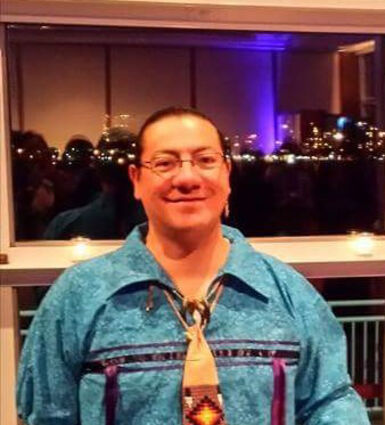 Dr. Nathaniel St. Pierre passed away peacefully at his home in Butler Coulee Aug. 13, 2017, after a courageous battle with cancer.

It was his wish to be at home these past several days, where family and friends had spent time with him. Nate was born Dec. 28, 1962, in Fort Belknap, Montana, to Roger St. Pierre Sr. and Gloria Henderson. He was their second child.

Nate was serving as president of Stone Child College in Rocky Boy, where he also served on several national boards that focused on tribal colleges and higher education institutions. His professional career spanned decades and always focused on education. He spent many years at Montana State University in the Office of Tribal Services and was a part-time instructor in the Native American Studies Department. He remains one of a small group of tribal members achieving a doctorate degree; his was in adult and higher education.

Nate received his three post-secondary degrees, all from Montana State University in Bozeman. His bachelor’s degree was in marketing and finance and both master’s and doctorate in adult and higher education.

Dr. St. Pierre was a traditional person and practiced the customs, culture and traditions of the Chippewa Cree Tribe.

A traditional wake has been held and funeral service were held at the Rocky Boy Catholic Church in Rocky Boy today, with funeral services at 10 a.m. Aug. 15. Nate will be laid to rest next to his father, as he requested, on St. Pierre Ridge.

Holland & Bonine has been entrusted with the arrangements.