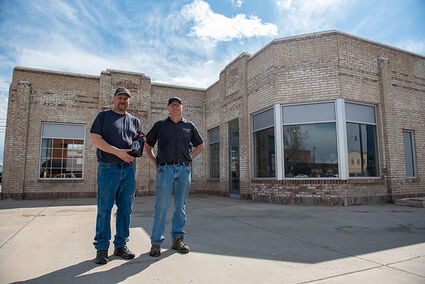 Jason Murri, left, and Steve Neiffer pose for a photo May 1 outside of Old Station Brewing Co. The new Havre microbrewery is opening Friday.

Steve Neiffer said he initially planned to have the brewery open last fall, but the 4,500-square-foot abandoned building had a lot of work that needed to be done.

"There are just a lot of pieces to put into place." he said.

Neiffer added that work has been done to restore electricity, heating and plumbing and build a new floor. A small expansion was also made on the rear of the building and a large walk-in refrigerator was installed.

Five varieties of beer will be served and brewed: a wheat, an IPA, a porter, a Belgian whit and a Scottish ale, Neiffer said.

He added that eventually he plans to serve food at the brewery, but does not know what items will be on the menu.

Neiffer said he plans to hire five employees to work as bartenders, servers and assistants to the brewer.

Murri said he thinks that he will be able to get the bulk of his ingredients in Montana, but his top priority is to stay true to the style of the beer he brews.

Neiffer said Old Station Brewing will be open 4 to 9 p.m Wednesday through Saturday.