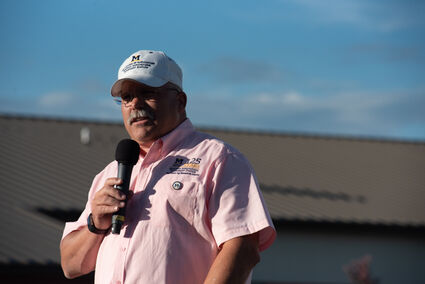 An afternoon deluge drove the tours of projects at Northern Agricultural Research Center indoors, but barely sidetracked the event, including the Agricultural Leader and Agricultural Advocate awards presented by the Havre Area Chamber of Commerce Agribusiness Committee.

Jim Bennett of the Agribusiness Committee presented the Ag Leader Award to Lowell and Marylou, Dale and Paula, Justin and Becki and Jared and Alice Miller,  and the Ag Advocate Award to Lance Johnson of CHS Big Sky during the dinner after the presentations.

The day was scheduled to include two sets of three different tours of various projects, starting at 4 p.m. and then the tours repeated at 4:30, allowing people to attend two tours if they wished.

When the rain hit, the tours were moved into three rooms in the Gregg R. Carlson Agricultural Science Center Office and Lab Building.

By the time the presentations were over, the sun was back out and people had their meal outdoors.

NARC Superintendent Darrin Boss, who also heads the research department of Montana State University's College of Agriculture, said the credit for how things went goes to the staff at NARC.

The annual tour is held to show projects being researched at NARC, established at the former Fort Assinniboine in 1915.

Boss also said the amount of research at NARC and the other six research centers goes to the staff. In the past five years, the dollars spent on research has gone up 20 percent, while the state is facing revenue problems and budgets are boing cut.

"These people are writing the grants and getting the job done," Boss said.

He said MSU is in the middle of personnel searches including to replace MSU Vice President of Agriculture Charles Boyer, who is retiring in December.

The commitee put in place was made smaller than for previous searches to streamline the process, but the public is needed in the search and should contact the committee or the research centers, Boss said.

"We need input from the grassroots of the state," he said.

Bennett said the Agribusiness Committee - which cooked the meal for the dinner - works to support, promote and educate about agriculture in the community.

One of the committee's first actions - and among its favorites - each year is going to Highland Park Early Primary School to take students graham crackers and milk and then tell them where those products come from and about local agriculture, and leaving them books about agriculture, he said.

When introducing the Millers, Bennett said they are not only leaders in their farming operations near Gildford, they are also active promoting and helping the community, from community events to working on the local fire department and Hill County Ambulance Service to Becki Miller being the Hill County Historic Preservation Officer.

He said Johnson goes the extra mile to help people at the CHS Big Sky elevator, down to barbecuing food for people driving trucks. 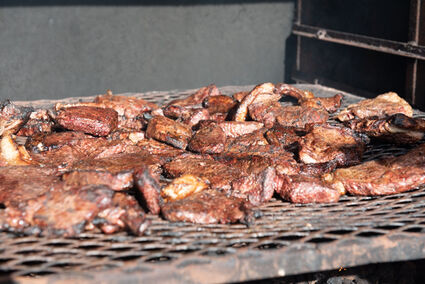 After the awards, Bennett also announced the Agribusiness Committee was giving a hand to Hill County 4-H as well, and presented a $5,000 check for its fund to rebuild the Chuckwagon at the Great Northern Fairgrounds, which will be open for its first fair in July.

Both Bennett and Boss effusively thanked the people and businesses who donated to the event, saying it couldn't happen without the generosity of the community.