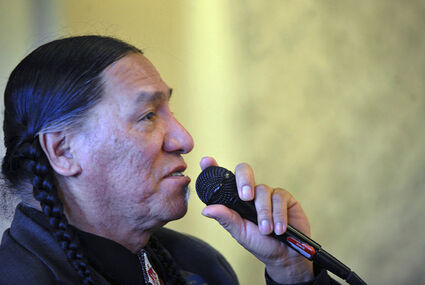 Former state Sen. Jonathan Windy Boy makes a comment March 20, 2013, on the Montana Senate floor in Helena. Windy Boy has commented on allegations that he sent harassing texts that led to procedure changes in the Legislature, saying it is part of a smear campaign.

Editor’s note: A February 22 Associated Press story used for information in this story, including AP reporting state Senate President Scott Sales, R-Bozeman, “said he knew the complaint involved Windy Boy, but he didn't handle it because it involved a member of the House, not the Senate,” and that “that the Windy Boy case ‘did influence my decision (about a new anti-harassment policy) to some extent.’” The Associated Press issued a correction Wednesday, saying, “Sales said he knew who was the subject of the complaint, but did not publicly identify him.”