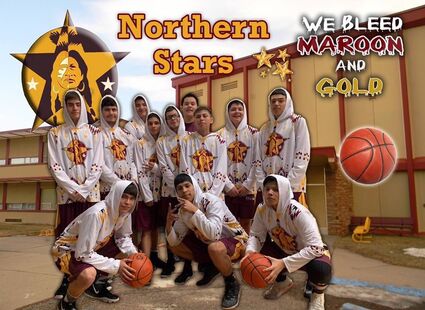 If the Rocky Boy Stars are going to bring another trophy home from the Class B state tournament, they're going to have to take the long road.

Wednesday night at the Belgrade Special Events Center, the Stars were eliminated from state championship contention with a 64-42 loss to the Missoula Loyola Rams in the first round of the state tourney. The loss dropped the Stars into the loser-out bracket where they'll play District 1B rival Shelby this morning.

Rocky Boy hung with the Rams early, trailing 15-11 after the first quarter, but the Rams scored 38 points over the next 16 minutes to pull away for good. The Stars got 18 points from Wyatte Caplette and 10 from Frankie Bacon in the loss.

In the other first round games, Poplar beat Three Forks, Bigfork took down Lodge Grass and Colstrip edged Shelby. Poplar and Bigfork will play tonight in one semifinal, while Colstrip takes on Loyola.

The Class B girls state tournament starts today with the Harlem Wildcats facing the Forsyth Dogies. The tourney runs through Saturday night.