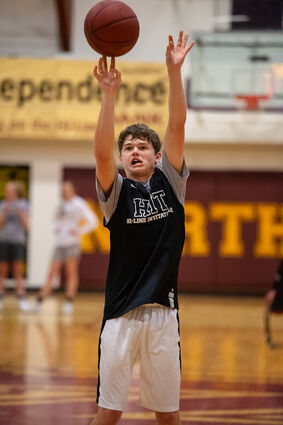 Havre High's Tommy Brown shoots during the 33rd annual Hi-Line Invitational Tournament this weekend in the Armory Gymnasium. Brown was part of the champion Class A squad.

While the MHSA basketball championships were completed a couple of weeks ago, many of the players who led their teams to state titles were in Havre over the weekend, taking part in the Hi-Line Invitational Tournament

The HIT was hosted by Montana State University-Northern and it was the school's 12th year doing it as well as the 33rd year HIT has been played. And following the three-day basketball extravaganza inside the Armory Gymnasium, in the boys tournament, it was the Class A team that emerged victorious in the All-Star tournament between classifications.

The Class A boys opened up...