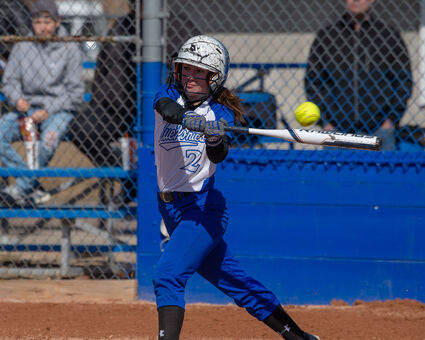 Havre High's Janae Boles hits during the Blue Ponies' doubleheader with CMR and Great Falls High Saturday at the Sixth Avenue Memorial Field. The Blue Ponies lost to both the Bison and Rustlers, but were excited to open the season at home.

The Havre High softball team was supposed to travel to Great Falls to open the 2019 season. Instead, the Blue Ponies hosted their Class AA rivals CMR and Great Falls High at the Sixth Avenue Memorial Field Saturday.

The teams came to Havre after poor field conditions caused a tournament in Great Falls to be canceled and the Ponies were in a great position to win the first game against CMR, however, they gave up a run in the top of the seventh inning, allowing the Rustlers to escape with a 3-2 win. Then, the Great Falls teams completed the sweep of Havre as Great Falls High, the defending Class AA state champions, used seven runs in the top of the seventh to defeat HHS 12-1.

"It was really what we needed," HHS head coach Tony Vigliotti said. "It was nice of the Great Falls schools to come up here and I thought that our kids played really well. Lauren Kato threw really well. We knew the hitting was going to be behind because we haven't had any live hitting yet and that Bison team is really good. CMR is also really solid."

In the opening game, Havre grabbed a 1-0 lead in the first inning when Sydney Wilting reached base safely and eventually scored on an RBI single by catcher Kinzee Peterson. That gave Kato, the starting pitcher, an advantage that she held onto until the top of the fourth inning when Josephine Slater crushed a two-run home run that gave the Rustlers a 2-1 advantage.

Kato was able to keep the Rustlers from adding to the lead and in the bottom of the sixth, Wilting tied the game as she scored on a passed ball. Peterson, who also drew a walk that inning, was on second base, but the Ponies couldn't bring her in. In the seventh, CMR plated another run and Havre failed to score the tying run in the bottom of the seventh giving the non-conference win to the Rustlers.

Madi Moore got the win on the mound for CMR after holding Havre to two runs on two hits. Kato put together a strong outing in her first start of the season, holding the Rustlers to three runs on seven hits in a complete-game defeat. Wilting and Peterson were the only Ponies to notch hits and Wilting scored both runs for Havre in the loss.

Sam Oliver went to the mound against Anna Toon of Great Falls High in the second game of the doubleheader for Havre. She held the Bison in check for most of the game as Great Falls High scored three only five runs in the first five innings.

Offensively, the Ponies were unable to muster anything against Toon and didn't even register a hit in the loss, although some errors in the bottom of the seventh allowed Havre to score a run and avoid the shutout. A seven-run seventh broke the game open for the Bison, which included a home run from Sarah Conway, who was 2-for-5 with four RBI.

"It was good for us to get out and compete," Vigliotti said. "I thought we played well. We talk to our pitchers about throwing strikes because I think our defense is going to be pretty good, so it was good. If we can make the other team put the ball in play we will be just fine."

The Ponies (0-2) were supposed to go to Lewistown this Saturday for the start of Central A conference play, yet that game has been postponed and will be rescheduled at a later date. Havre is scheduled to be back on the field for the Lewistown Invitational April 12-13. 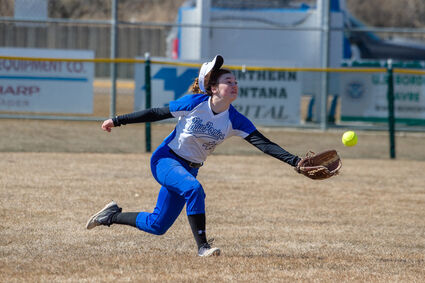 Sydney Wilting goes for a catch during Saturday's home opener against Great Falls at the Sixth Avenue Memorial Field.