A ride down the unbeaten path 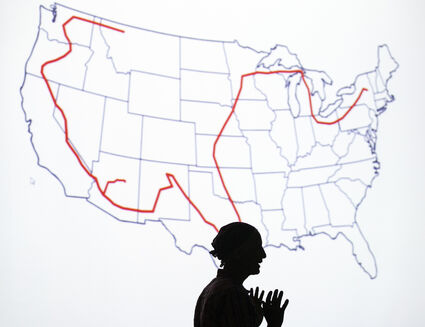 Bernice Ende, silhouetted in front of a map showing her current book tour route, speaks to a small group of people Tuesday at Montana State University-Northern in Havre.

"I never in my entire life said I wanted to go on a long ride," she said in an interview, adding that at the time she started long riding she just knew she wanted to ride.

Ende said her story starts where most stories do, her birth. She said that while her mother was pregnant with her she was there, riding in her mother's belly. Her love for horses goes back as far as she could remember, first learning to ride by the age of three. She added that she also comes from a long line of suffragists, her mother, her grandmother and even her great-grandmother, all of whom also fell in love with Montana in some capacity. Her paternal great-grandparents, homesteaded in Chouteau County in the Hoy Coulee area in the late 1800s and early 1900s.

Her mother's side, originally from Minnesota, also fell in love with Montana in some form. Her grandmother, who was from a well-to-do community in St. Paul and attended Harvard University, moved out to Montana, and fell in love with a cowboy. Although he was below her class, she said, they got married and moved back home to Minnesota, where the marriage raised eyebrows.

Her mother, who was also well-educated, moved out West after serving for the military, leaving Minnesota and becoming a waitress outside of Glacier National Park, Ende said. While at Glacier, she fell in love with Ende's father, who was working as a maintenance worker, wrangler and odd-job man for the park after he served in the military. After they met, Ende's mother became pregnant and they moved back to Minnesota to start their family.

Ende said that it was humorous because her grandmother moved out to Montana and married a man below her class, then her mother went and did the same thing. She added that her mother, having graduated from a university, married a man who could barely read or write.

She said she remembers growing up looking at and being amazed with the black and white photographs of Montana.

Growing up, she became interested in dressage, an English riding discipline which later led her to ballet, which she taught for 25 years, she said.

Ende said that both were art forms developed at that same period of time, with the Italian and French spearheading both arts.

She added that, when she was a teenager, she ran away from home, "running amok," traveling to California, Oregon and various places in the West. She later got married, then divorced, which took her to Trego, Montana, where she taught ballet before deciding she wanted to ride.

At first she didn't know what long riding was, she just knew that it was what she was supposed to do, a force within her driving her down the path less traveled.

The first trip she decided to take was to Albuquerque, New Mexico, to visit her sister, about a 1,000-mile ride.

"And I rode into a nightmare, but it became my life," she said.

That first ride she left late in the afternoon, she said, dressed nice with a white shirt, black vest and a worthless hat.

It was the worst ride, she said, it simply couldn't have gotten any worse. She said she was ill-prepared for the ride, although she was physically fit and well-seasoned on a horse, embarking on such a ride has many variables that she had not previously considered.

She said she overpacked. While riding to New Mexico, she said she felt so bad because she kept having to throw things away or leave things behind to lighten her load. She added that she also didn't have a tent for the first three years she was riding, sleeping on the ground, holding the reins of her horse in a death grip.

"I wanted to go back," she said, adding that something inside her pushed her further.

"I swear I didn't sleep for weeks," she said.

For the first three years, she rode with only one horse and her dog, she said.

Down that unbeaten path, though, while riding through Wyoming, north of Rock Springs, she found something.

"I climbed into my own skin for the first time," she said. "... I discovered who I really was."

She said she discovered a well of courage and strength and determination that she never knew existed in her adult life.

"It was like for the first time, I had gone back, had the opportunity to go back," she said.

Time and society shape a person, she said, tell them to work this kind of job, talk this way, love this person and live this life; but when a person is a child their minds they are free of this, they are courageous and curious, interested in life.

"We all face it. Everybody faces it," she said. " ... I stepped back into that mind of my childhood."

She said she remembers looking out and thinking that she felt like Roy Rogers and other Western actors, whose movies she as a kid watched in black and white.

She said that her mentors were men and while contemplating her changing mindset, she wondered how she was able to overcome the barrier of sexism.

"When you are a child, you don't think in terms of male and female, you're young enough to go anywhere in your mind," she said.

Since that first ride, Ende has ridden more than 30,000 miles across the United States and Canada and plans to ride in Europe after her book tour and documentary are finished.

Ende said that she has also been the first person to ride round trip coast-to-coast. But while standing on the mountain of what she has done, she said, she only thinks toward the future.

"It doesn't seem like it's there at all," she said.

Moving forward, she said, she has many more rides to come. A person is in the moment while they are riding, the end not mattering once they get to where they are going. It's about the journey.

While riding, she also found something else, she said. When she first started riding, unlike other long riders, she was riding because of her love of riding, but after meeting other women in the places she traveled she found that she wanted to ride to encourage female leadership.

Many women came to her on her rides and shared their thoughts and stories with her, telling her how brave and strong she was for doing something that many of them only dreamed about. 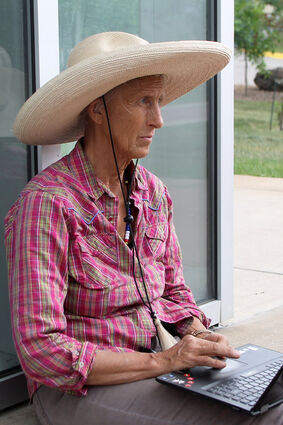 Bernice Ende, the Lady Long Rider, sits out front of the Hensler Auditorium before giving a presentation as part of her book tour Tuesday at the Montana State University-Northern campus in Havre.

In 2014, while on her 8,000 mile ride, she celebrated the 100-year anniversary of women of being able to vote in New York, she said. When she was there she visited the homes and graves of suffragists such as Susan B. Anthony, Elizabeth Cady Stanton and Matilda Joslyn Gage. She added that she will also travel back to New York in 2020 to celebrate the anniversary again, riding in the parade and wearing traditional suffragist clothing.

She added that Gage is her favorite.

Ende said that the feminism movement has been one of the most important movements in the United States, although people don't think about it very much. Feminism, she said, has become a dirty word in modern society.

"Every single woman today stands on the shoulders of these women who did what they did for us," she said.

She added that her story, her rides, are to encourage people to travel the unbeaten path, to pursue their dreams and to go on and overcome barriers.