Big Kasee Henderson is becoming a wanted man on the gridiron 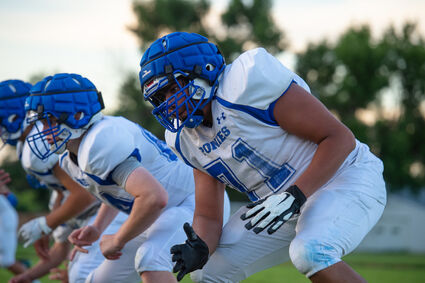 Havre High's Kasee Henderson lines up during a drill at Blue Pony Football Camp Monday night in Havre. Henderson is one of the top offensive line prospects, not just in Class A but in all of Montana heading into his senior season.

If it seems like Kasee Henderson, Havre High's All-State left tackle, is bigger, faster and stronger than he was a season ago, that's because he is.

However, as much as Henderson's body has grown, it's the growth he has shown as a player that has so many college football teams interested in where he will play when his Blue Pony career comes to a close.

"I didn't really think I would play college football when I was younger," Henderson said at this week's Blue Pony Football Camp. "But as soon as I got All-State honors last season, my coaches started telling me I had a chance."