By Derek Hann and Ryan Berry

500 acres destroyed in wildfire near Havre 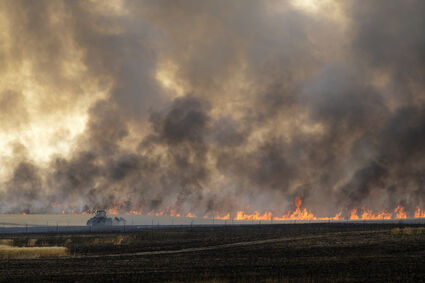 A farmer drives a combine away from a blaze in a wheat field as firefighters from multiple local agencies attempt to control the fire Tuesday, July 28, 2019 near Kremlin, Mont.

Several fire agencies responded to a large field fire south of Fresno Road between Havre and Kremlin on the Fresno High Grade earlier today. After almost three hours of battling flames, a patchwork group of local departments and neighboring farmers were able to extinguish the fire – but not after losing around 500 acres of wheat and pasture.

"We managed to corral it," he said. "It was starting to get into some pretty rough country. ... I'm happy with the way it turned o...