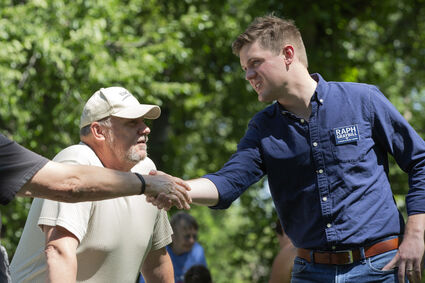 Raph Graybill, who is running for Attorney General, shakes hands during a Working Families Barbecue Saturday at Pepin Park in Havre.

Several state candidates spoke Saturday at Pepin Park discussing their campaigns for the upcoming election in 2020.

The event was in honor of working Montana families and was held by the Hill County Democratic Party and the Big Sky Democrats. Nine candidates from six different races spoke at the event, and focused on issues that face Montana.

Candidates for Governor, Senate and Congress were profiled in Monday's edition of the Havre Daily News.

Since Attorney General Tim Fox announced his campaign for the governor's office in January, a number of candidates...