An electric first practice of 2019 for MSU-Northern football 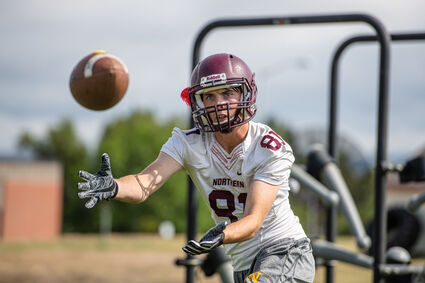 Montana State University-Northern's Keagan Stroop runs through receiver drills during the Lights' first practice of 2019 Sunday afternoon. Northern's fall camp-opener was interrupted by a storm, but it didn't dampen the excitement of opening a new season.

There is a lot of electricity surrounding the Montana State University-Northern Lights as they head into the 2019 season, the second under the direction of head football coach Andrew Rolin.

Yet, Sunday afternoon, when the Lights opened fall camp, there was a little too much electricity in the air, as rain and thunderstorms throughout the area forced the practice to be delayed after around an hour of work on the field due to lightning.

"We had some lightning,' Rolin said. "So we went in and were able to come back out and finish. We had the typical rust that had to be knocked off but the tempo was great."

The opening practice of fall camp was the culmination of a busy few days for Rolin and the rest of the coaching staff. Northern welcomed in more than 50 new players to the Lights starting Friday, when newcomers were slated to report. Veteran players with the program returned Saturday.

"We have 54 new guys," Rolin said. "But we had 22 of them that were here with us during those summer months. We had those transfer guys in here, trying to get acclimated and that's going to really help them going forward."

The other 30-some newcomers to the Lights 2019 roster also hit the practice field for the first time Sunday afternoon, yet the workout was interrupted about midway through due to inclement weather. But with the season-opening game against Arizona Christian rapidly approaching, there is no time to waste and Northern will get back to work tonight when the Lights will be back on the practice field at 4 p.m.

While many of the players will be getting their first introduction to college football over the next few weeks, at some positions, Northern doesn't have the luxury of a long grace period. One of those spots is at quarterback, where the Lights will head into 2019 with a trio of freshmen competing for the starting job and a first-time starter no matter how you slice it.

That competition started Sunday, as Tre' Long, a 6-foot-1, dual-threat quarterback from the state of Washington, and Oakley Kopp, a 6-foot-2 signal caller from Utah, got reps alongside Brenden Medina, who was the lone quarterback for MSU-N during spring football. 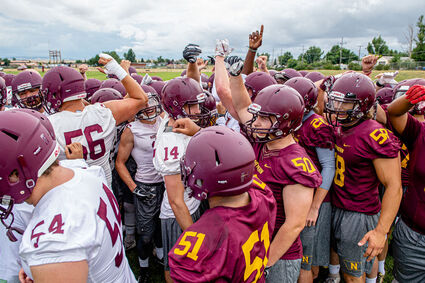 The Lights hold their first football practice of 2019 Sunday afternoon in Havre.

Even though the first practice may have been unconventional due to the stoppage, in terms of time on the field, it keeps MSU-N moving forward. With the first game now less than three weeks away, the Lights will hold a two-hour practice each day this week before taking part in their first intra-squad scrimmage of the fall Saturday.

Due to NAIA practice guidelines, the Lights will practice in shorts and helmets the first two days, before wearing shoulder pads and helmets for the next two. That means padded practices will begin Thursday ahead of the first scrimmage Saturday (10 a.m.).

The Lights will hold a second scrimmage Aug. 24, which is set to begin at 4 p.m. That will serve as the conclusion of fall camp for the Lights, who will travel to Phoenix to open the 2019 season. The Aug. 31 meeting between MSU-N and Arizona Christian will be the first between the two schools. Kickoff is set for 7 p.m.