Chris Peterson Column: Havre, Hi-Line and the Havre Daily News will always be in my heart 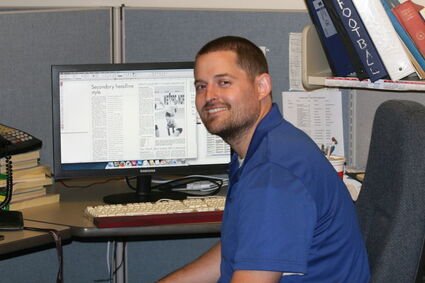 I am not very good at saying goodbye. I never have been and that is making it especially hard to say goodbye to Havre and the Havre Daily News.

But the purpose of this column is to say exactly that — goodbye, to all of you. As you may or may not have heard, I am leaving for the Independent Record in Helena and while I am excited for the new journey that lies ahead for my family and me, it’s with a heavy heart that I say goodbye to Havre and the Hi-line.

Just over five years ago, the idea that I would be a sports editor somewhere seemed obnoxious. I had a corporate job in Missoula and while I wanted to get back into sports writing, I wasn’t sure if the chance would ever come. But then it did.

The job I held previously from 2005-08 as sports reporter of the Havre Daily News opened up and thankfully, George Ferguson, the sports editor, decided to take a chance on someone who had been out of the newspaper business for more than five years.

Quite literally, I have learned just about everything I know about journalism from George. So when it comes to people I have to thank, he’s at the top of a lengthy list that also includes HDN publisher Stacy Mantle, former editor John Kelleher, managing editor Tim Leeds, photographer Colin Thompson and all the other tremendous colleagues I’ve had the privilege of working with over the years.

Looking back, the fact that I am in this business at all sometimes feels like a series of random events, connected and conspiring to ensure a certain outcome.

That may sound strange, but that’s sort of how life works. It has been a long, strange trip but in the end, it has all made sense. Each puzzle piece fit perfectly, especially being at the Havre Daily.

I wasn’t born in Havre, but I did grow up here and having family here, I always knew about the Blue Ponies. My first introduction to Pony athletics came in the mid-1990s, at the Butte Civic Center. These were the days of the old Central A and the first time I watched a Havre basketball game was when Loree Payne was a freshman.

She was and is the best Havre athlete I have ever seen and it was during that time that my interest in Havre sports began to take shape. Of course, over the years, that interest has only grown, not only in Havre but all along the Hi-Line.

People that aren’t from here, just don’t really understand how special it is. Friday nights filled with high school football are always unique, but some of the coolest places to watch a game are right around here. There is nothing quite like Blue Pony Stadium or Hoon Field in Chinook, when there are so many people it’s standing room only. It’s hard to find a more picturesque setting than Chester or Big Sandy on a Friday night, as the sun sets and the lights on the field illuminate things.

Along the same lines though, atmospheres can rival watching hoops in Box Elder and you certainly won’t find the passion that you will in Turner, Hays, Rudyard, Gildford or Chester, as well as the other treasures along the Hi-Line. These folks love their communities and their sports teams are a reflection of that and getting to be a small part of that will always be an honor.

To say that I have been lucky to cover sports in this area is an understatement. It has not only been a blessing but also, a tremendous opportunity. I have been fortunate to cover some great, even historic teams, as well as some incredible athletes, but the best part of my job will always be the people.

The people are also what I will miss the most. I have made a lot of great friends here; friends who share my passion for sports and leaving them behind will be most difficult. I will also miss Blue Pony Stadium, the Pony Corral, the 9C tournament and some of the best taco-in-a-bag you will ever find.

If it seems like I am rambling, it’s because I am. As I said, I stink at saying goodbye.

I guess in the end, I simply want to impress on every person who reads this how thankful I have been to work at the Havre Daily News. There isn’t enough room in the sports section for me to mention every person I am indebted to, but for every coach, player, athletic director, fan and reader out there, thanks, from the bottom of my heart.

I am excited about this next step but Havre will always be my home and I will miss it dearly. At least I can always be a fan and seeing asmy time is now up at the HDN, from now on, when it comes to sports in Havre and on the Hi-Line, that will have to do.