Senior-laden HHS netters will be good this fall 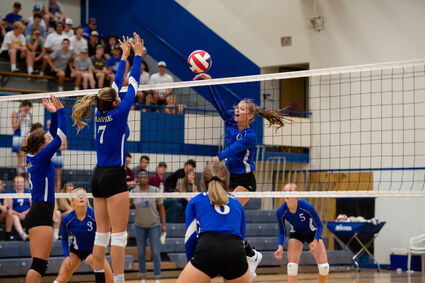 Havre High senior Jessa Chvilicek hits a shot during last week's annual Blue/White volleyball game. Chvilicek is one of many talented seniors and veterans that are helping to make the Ponies a very powerful team in 2019. The Ponies open their season at this weekend's Eastern A Top-Off Tournament in Laurel. For more on HHS volleyball and football, see Friday's Havre Daily News.

The Havre High volleyball team has shown steady improvement over the past couple of seasons, but in 2019, with some key players returning, the Blue Ponies have an opportunity to make an extended postseason run.

HHS put together a solid campaign last season, going 12-8 in the regular season. The team looked poised for a run to state but fell short at the Eastern A Divisional.

Now, even though the state tournament may be a few months away, it seems like an attainable goal for a team on the rise.

"I think it's going to be a good season," HHS head coach Tamecia Jarvis said. "The girls are l...