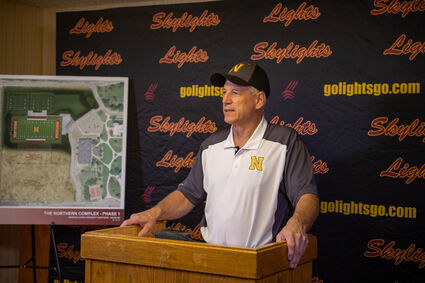 Montana State University-Northern Chancellor Greg Kegel speaks Satuday during a press conference about Northern's fundraising for a new football stadium at the university.

"When this project comes to fruition, the sports complex will enhance much more than our football program," Kegel said. "We will bring people together in  a community center for events of all kinds, space dedicated to athletic conditioning, and classroom space for health and human performance courses. All of this activity will contribute to the long-term health of our campus."

Kegel announced in 2016 he wanted to build a home for the Northern Lights football team, which has used the Havre High School Blue Pony stadium for home games since the football program was brought back last decade.

He has said his long-range goal is to add to the stadium, creating a multi-use sports and education complex.

With 80 percent of phase 1 funds raised within nine months, Kegel said Saturday, he hopes Northern can raise the balance of the funds for phase 1 needed by spring 2020 to allow for construction to be completed before the 2020 season.

Phase 1 entails laying down the field and building up some stands. The stadium is planned for construction in the practice field on the west end of Northern's campus, near Hagener Science Center and Cowan Hall.

Cronk added that her gift is one of the largest from an individual in Northern's 90-year history.

"Well, we feel very lucky and fortunate to be in a position to do something like this," her son Greg Baltrusch said. "My mom was looking for something to give back to the community, and this came up and it fit perfectly for what we were looking for."

He added that his mother is very excited and very happy to be able to help out, not only Northern, but her community.

"When I just heard about the stadium, I was a skeptic just like everybody else, but I wanted to know more information, and I had the opportunity to listen to Chancellor Kegel give a presentation, and it was, like, I see it now," Baltrusch said. "It's not just a stadium, it's a draw for potential students, potential athletes and you know they might come to Havre and take a look when they are searching for a college they might take a closer look now."

Several people talked about the importance of the project for Northern in general as well as for the football program.

"I've seen the conference grow, and with our stadium project that we got going on, it is going to keep us up with The Joneses, if you will, and that will help all of our programs grow, not just football," Northern Athletic Director Christian Oberquell said. "Obviously, football will use this, but a lot of our other  programs will be using it, such as cross country for training, I'm sure the wrestlers will be out there, our intramurals will be using that, as well, so it is not just an athletics thing, it is a student life project, as well."

Oberquell added that the stadium project will attract students for Northern and also student athletes.

"This is a great time, we got great leadership with Chancellor Kegel, he is a chancellor who wants to get things done. He wants to see things grow. We are trying to get up to 1,500 students, and this is a great initiative to do that," Oberquell said.

This also gives the past alumni a place to call their own, and that is what Northern has been lacking, Oberquell added.

"Havre and the greater Hi-Line stepped up within the past nine months. We've raised $2.2 million dollars, which I think says a lot about the community and how much they believe in not only Chancellor Kegel, or Christian Oberquell, or myself, but the Northern community itself," Rolin said. "I think Havre is Northern and Northern is Havre, and they believe in what we are doing here and this is a great example of that."

He added this is a great example of Northern stepping up and improving its facilities, not just for football, but for Northern as a whole.

"There is no doubt it's going to have a big effect on our recruiting, we are going to be able to recruit students in the state of Montana, we are going to be on par with the rest of our conference with our facilities, and in my opinion, as we grow into Phase 2 and Phase 3 we'll have better facilities than most everybody in the conference," Rolin said. "To me that is what it's all about, we got to compete on all levels."

Rolin said, with the project right now being in the red zone, the drive isn't done yet.

Cronk said the the fundraising efforts opened in January, and the Northern Alumni Foundation is now asking for alumni and supporters to help close out the project with contributions and pledges.

"The whole mission of the Northern Alumni Foundation is to support the initiatives of the campus, the chancellor and the university as a whole," she said. "We are very excited to be part of this project. The stadium build is only going to be successful with the generosity of the public and the donors we see out there, and we've come so far in a short amount of time, in nine months raising $2.2 million, but we do have a ways to go."

Cronk added that donor support comes from people who have a meaningful relationship with the university and north-central Montana.

"We really need to continue to evolve and strengthen our university up here on the Hi-Line and if you are inspired, please go (to the foundation website) to make a donation," she said.

Cronk said Independence Bank has been a wonderful partner in giving the foundation the bridge loan that will allow them to start the construction on the project immediately once the $3 million goal is met.

Paul Tuss, a current member and past chair of the Montana Board of Regents of Higher Education, said the success of raising this much money in a short amount of time is a big deal, and it says Northern has some incredibly generous donors and that people really believe in Northern and the value that it brings to Montana.

"As a regent, I was very pleased to support this initiative and very pleased when I saw this agenda item on our Board of Regents agenda," Tuss said. "This will, without question, will enhance the walkability of the campus and the attractiveness of the campus to both existing students and prospective students in the future."

Tuss added that, in regard to his day job of Bear Paw Development Corp. executive director, nothing is more important for proper economic development than proper higher education. 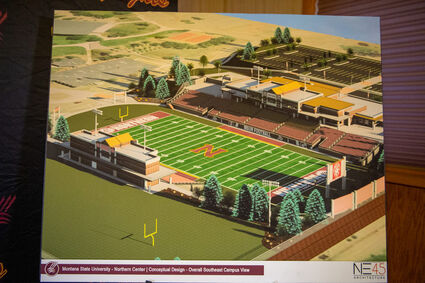