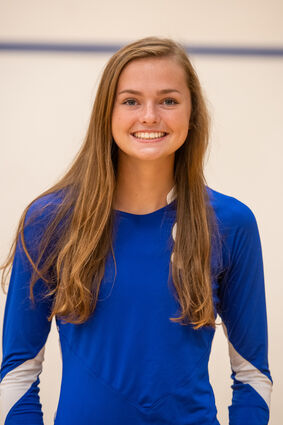 Playing in their first Class A state tournament in four years, the Havre Blue Ponies gave Corvallis all the top-seeded Blue Devils could handle in the opening round.

Unfortunately for Havre, it wasn't quite enough.

In the opening round of the state tournament Thursday in Bozeman, the Blue Ponies had a tough match against the Corvallis Blue Devils, and Havre fell to the Western A champions by scores of 25-17, 25-20, 25-27 and 25-21.

In the end, HHS head coach Tamecia Jarvis was looking for more from her team but was glad to see some sparks in the match.

"We definitely could've won that match," said Jarvis. "But, we had a lot of dropped balls and miscommunication on the court. I just think we need to be a little more aggressive on our side."

Havre had a tough start in the first two sets of the match. In the first, the Ponies battled Corvallis to stay in the game, but the Blue Devils edged out HHS both times and looked to shut out the Ponies 2-0.

But, Havre did not go down quietly. In the third set, the Ponies kept with Corvallis constantly and pulled away with the win 27-25. Havre was behind 2-1 in the match. In fact, the Blue Ponies were the only team in the Class A first-round that was not shutout by their opponent.

"It feels pretty good," Jarvis said. "It's nice to see that we kept up with the team (Corvallis), but they were definitely beatable. We just have to make sure that everyone is on the same page and come with good attitudes tomorrow, with a willingness to go out there and play."

Despite the third-set win, the Blue Devils finished off Havre's hopes of advancing by keeping the Ponies at a distance and winning the match 3-1. Another tough loss in the first-round once again moves HHS into the loser's bracket.

Senior Jessa Chvilicek ended the match with 10 kills, 2.5 blocks and one ace for the Blue Ponies. Fellow seniors Sam Oliver and Peyton Brown put up some good numbers, as well. Oliver had 24 digs and Brown racked up 22 digs.

Havre will look to stay alive when it takes on Butte Central today in a loser-out match.

"I think it'll be a good match," said Jarvis. "I'm excited. I guess we'll just see what happens. The girls got to just want it."

Meanwhile, the opening round of the Class C state tournament went very well for Fort Benton. Fort Benton had an intense first-round match against the Charlo Vikings with the Longhorns beating the Vikings by scores of 30-28, 22-25, 25-17, and 26-24.

For the Longhorns, the win moves them forward in the winner's circle. The match against the Charlo Vikings was heated and proved to test the Longhorn's abilities on the court. Fort Benton pulled away with a big win in the first set, but Charlo kept it close. The score climbed past the usual 25-point mark and went all the way to 30-points. Then, the Vikings gave the Longhorns another tough bout in the second set and Charlo pulled away with the second set to tie the match 1-1. But, Fort Benton took back the match lead with a win in the third set and leaded 2-1.

The fourth set was a lot more dramatic for the Longhorns. Fort Benton was down 24-22 late in the set, but a 4-0 run from the Longhorns ended the match, advancing Fort Benton into the next round.

"We are a team that likes to come from behind," Fort Benton head coach Shana Diekhans told Chris Peterson of 406 Sports. "We like to dig ourselves a hole and that's when we seem to play better. We like a little pressure I guess."

Nicole Axtman racked up 21 kills and 19 digs in the match, while McKenzie Clark put up 18 kills, three blocks and an ace. Axtman was a standout player against Charlo and made some key kills when it mattered.

The Longhorns moved forward in the winner's bracket and met the Bridger Scouts on the court Thursday night in the Class C quarterfinals. But, the Scouts proved too much for Fort Benton, as the Longhorns were swept in three sets.

Fort Benton will look to stay alive when it faces either Belt or Roy-Winifred in a loser-out match today at 2 p.m.

The All-Class State Tournament runs through Saturday afternoon at the Brick Breeden Fieldhouse in Bozeman.